A day in the life of... a Jalabandhu

Uttam Majundar is a successful Jalabandu (handpump mechanic) in Digambarpur (West Bengal, India). But now he risks becoming a victim of his own success. Following a day in his life explains why. 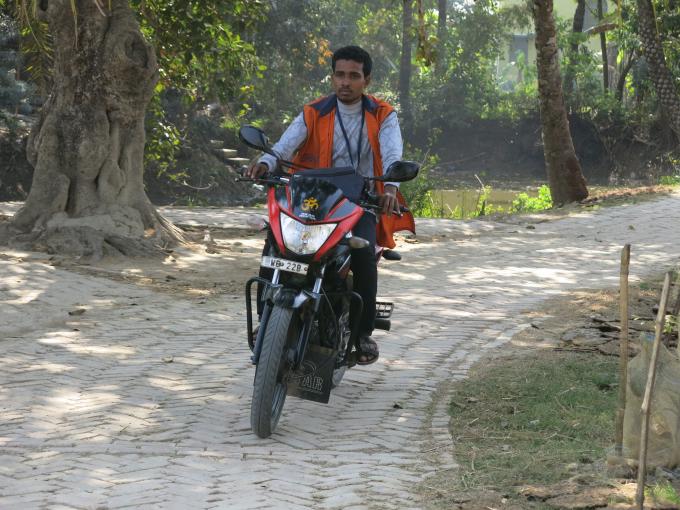 As usual, Uttam gets phone calls early in the morning, when people go to their handpumps and find something is wrong. Today he has two calls from water committee members asking his assistance.The first call is from the treasurer at the handpump of 5 No Gheri hamlet, in his home area of Digambarpur. As usual, the first thing he asks, is whether the treasurer will have money at hand to cover his travel and service costs. Mr Samar Karan, the treasurer, confirms; his water committee has been performing very well over the last 7 years and they have enough petty cash for small repairs.

Arriving at 5 No Gheri hamlet, he applies his usual routine, and quickly finds out the problem. The plunger rod is damaged and needs to be replaced. This is a small job, and he has the spares at hand. According to his service charge chart, he should charge Rs 200 (a bit more than 3 dollars) for this repair. But the treasurer bargains whether he can just pay Rs 150. They settle for Rs 175.

This situation illustrates the first part of Uttam being a victim of success. Over the last years, he has been contracted by the Gram Panchayat of Digambarpur to carry out preventive maintenance, and most of the pumps now work fine. He has also been doing lots of work on what is called "conversion", or the deepening of the tubewells, so they can don't fall dry during summer. This work gave him a net annual income of some Rs 80.000 (US$ 1300). But he did his work so well, that nowadays, only these minor break-downs occur, and these small repairs just don't generate enough revenue. He estimates that his net income has dropped by about half.

Anyway, his work is quickly done, and he has some spare time before he goes to the neighbouring Gram Panchayat. He decides to pass by the hospital, which just got connected to the piped scheme which is being constructed in part of Digambarpur. The hospital has contracted Uttam to do the plumbing inside the premises. Now that he has some time left, he decides to spend two hours continuing with this plumbing assignment. In fact, he sees plumbing as part of the diversification of his income. He cannot live off just doing minor repairs alone.

After two hours of work there, and a nice fish lunch, he drives to the neighbouring Gram Panchayat. It is not far, but because this is an island area, he needs to take a ferry, which takes its time. He arrives at the broken water point. He assesses the situation. This one is more serious as it needs the replacement of the more expensive connecting rods. And he doesn't have them on stock. "If you give me the money, I can get one at the hardware store" he tells the committee. But the committee doesn't trust him. He has not done much work in this Gram Panchayat area, and people don't know him yet. "Ok, then I will provide you with the specifications for the spares. You can get it yourself at the hardware store, and I will then come back to repair it when you have it", he responds.

This is the second problem of his success. Because of the quality of his work, other Gram Panchayats have started calling him. But these don't know the intricacies of the financing yet. He will only do the repair if the committee has the money ready or when there is a guarantee of the Gram Panchayat. He will now need to come back to do the repair once the committee has procured the spare part. And if he has bad luck even a third time to collect his remuneration from the Gram Panchayat. That all takes time, and his travel costs don't get covered. Working in another Gram Panchayat area is a loss-making business. Or maybe he should see it as an investment in getting a new clientele?

On his way back, he stops at the Digambarpur Gram Panchayat office. There he needs to collect his money for some spares he has provided. That proves to be an efficient affair. He has compiled an overview of his expenses of the last month, and informed the Gram Panchayat beforehand, so they can have the cheque ready when he passes by. At least for that part, he remains successful.

Now he can go home, wondering where his business should bring him next. Expanding his area of work to neighbouring areas, where much major repair and conversion work needs to be done. He can then at least keep on employing his two assistants. Or, move into plumbing? As elsewhere in India, piped water supply has the future and various new schemes are planned in Digambarpur. Sure, the handpumps will remain for many years to come, and he can keep on doing the minor repairs, whilst getting his main income from plumbing. Time will tell. For now he is proud that his successful business has contributed to Digambarpur being one of the islands of success. 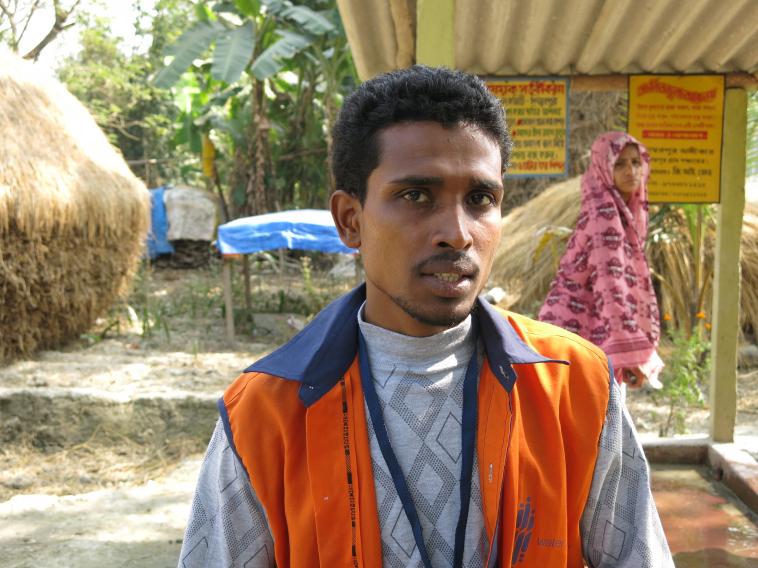 Supporting Jalabandhus
Since 2008, the NGO Water For People has been supporting a number of Jalabandhus in providing repair services. This was done because the previous arrangement – i.e. Gram Panchayats doing the repairs themselves – didn't work. It often took 15-20 days before the Gram Panchayats could carry out the repairs, and all that time, users would be without water. By involving these Jalabandhu's as private entrepreneurs, the downtime has been reduced significantly, often to just half a day, as they have an incentive to carry out the repair as quickly as possible. The arrangement, as followed in West Bengal, holds important lessons for other countries as well. first of all, make sure there are enough handpump mechanics, but not too many. For handpump repairs to be of a viable business, the handpump mechanics need a certain market size. If there are too many handpump mechanics, that market is just no there. Also, the India example shows that for the major repairs some contribution from local government, i.e. Gram Panchayats, is needed. As IRC's work on life-cycle costs has shown, communities are often not able to cover all the major repair costs. By having some co-financing from local government, that problem is avoided, and a viable business is established.

The Jalabandhu system has been set-up and supported by Water For People India since about 2008.

Islands of success : towards water, sanitation and hygiene services for everyone, forever in Patharpratima and Sagar blocks, West Bengal, India

The effects and costs of support to community-managed handpumps in Patharpratima, West Bengal