A day in the life of... a circuit rider

José Miguel is a circuit rider: a technician responsible for providing technical assistance to a number of water committees in his area around San Vicente in El Salvador. There are around 30 water systems on his circuit which he visits regularly.

This week I had the pleasure of accompanying him on part of his route, to see the day-to-day practice of this work, about which I had read and even written so much. This was the opportunity to observe a day in the life of a circuit rider for real.

The first stop is the community of Las Flores, a relatively big settlement of some 700 households, and is more of a peri-urban settlement than a rural village. The water committee not only manages the water supply system, but also the sewerage system and even a wastewater treatment plant. One of the reasons to come here is to have a look at the pumps of the wastewater treatment plant. The water committee receives a hefty energy bill every month, amongst others due to the pumping at the treatment plant. I had never seen such a monster of a plant; sewage is pumped from one big concrete tank to another. And in the end, the effluent still is not clean. Probably, the plant would need some re-designing, or even a secondary treatment. However, such redesigns fall outside the scope of work of José Miguel. He can only advise the community’s pump operator on different pump sizes and possible ways of pumping more efficiently, so the energy bill remains manageable. 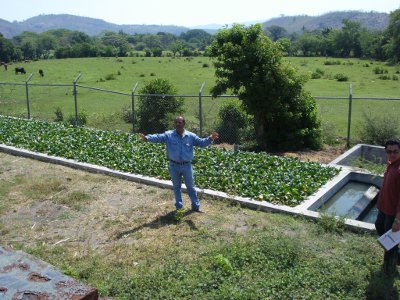 While in Las Flores, José Miguel gets a phone call from a nearby place, called Las Ánimas. The operator in Las Ánimas had done water quality tests in different parts of this multi-village scheme, and in one sector the residual chlorine was too low. The water is chlorinated at different branches of the system, and probably not enough chlorine is added in that particular branch. We pass by Las Ánimas, where we talk to the operator and to the president of the water committee. At the moment, there is not much that José Miguel can do. Finding the exact cause of the problem will require a more detailed inspection of the branch and taking residual chlorine tests along that line. With a motorised chlorinator, the dosification can then be better calibrated so the whole branch gets enough chlorine. José Miguel will have to come back for that in a next visit. 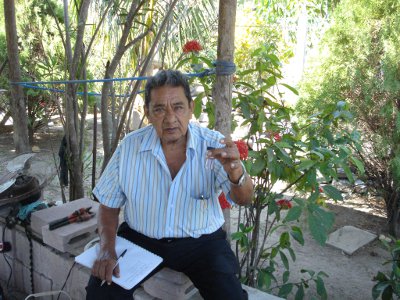 After the unexpected stop in Las Animas, we continue our route to the last village of the day: Santa Teresa. We discuss the status of the financial accounts with members of the water committee. Currently, the water committee is just breaking even every month. With support of José Miguel they have developed a tariff structure that seems fair. As water is metered, users pay by the amount of water consumed, at a cost of 7.50 US$ for the first 14 m3 per month. For every additional m3 an additional amount is levied. Although the number of families in arrears is a bit high (around 20%), the real problem seems to be the elevated cost of electricity for the pump. The water committee is aware that a subsidy exists for rural water committees so they can get back part of their electricity bill. José Miguel is asked to help in applying for this subsidy.

These three water committees are all members of ASSA (the Salvadorean Water Services Association). This association has 6 circuit riders like José Miguel, each attending some 25-35 committees. ASSA is largely financed via the National Rural Water Association (NRWA), a similar type of organisation attending rural communities in the USA. In addition, members of ASSA can make voluntary donations to ASSA according to their perceived benefit, but only if their finances allow it. ASSA lately refused to accept a donation of Santa Teresa as its financial accounts were just in balance – not the moment to have an extra expenditure. ASSA is not the only one in El Salvador. A similar association, called ANDAR supports another 200 water committees. Probably, there are other similar associations. The impact of these associations is not insignificant. Through support in areas like book keeping, chlorination, pump operations and tariff settings, members of ASSA and ANDAR have been able to provide better services and have more sustainable water committees. 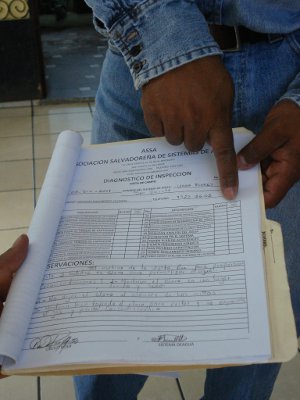 The president of Las Flores explained how their system had a flat tariff of 0.50 US$ in 2002 when they joined ASSA. At the time the system functioned poorly as the tariff was not sufficient to cover the pumping expenses. With ASSA’s support they were able to calculate a more realistic tariff and gradually increase it to the current level of some 5 US$/family/month, a level which allows them to have a small reserve for the eventual replacement of the pump. Las Ánimas didn’t use to chlorinate the water; now they do, and ASSA played an important role in promoting that. Further impacts of the work of ASSA are available from the link below. Two water committees visited, which are member of the other association, ANDAR, relate how ANDAR had helped them applying for the energy subsidy, so that they now have more affordable electricity bills. Without the support from such kinds of associations, probably these water committees would have struggled, providing poor quality water or not being able to pump water every day. Some of these systems might have collapsed altogether. The costs of such support are reasonable. Estimates of the total costs of ASSA’s work are somewhere in between 0.25 – 0.47 US$/year per inhabitant in the communities they support. Members of ANDAR pay around 0.60 US$/year/inhabitant.

These figures are all below the 2-3 US$/rural inhabitant reported earlier in Working Paper 5 (available below). Their costs are low because they operate on a shoestring budget (e.g. going to communities often by bus and not by big 4WD’s) and do not offer support in all fields. If support in other themes would be provided, costs would probably go up. Still, post-construction support via such associations seems a very cost-effective approach, and could very well complement other post-construction support models for example of the government.

Amidst the conceptual discussions on sustainability of rural water supplies, it is refreshing to see the work in the day in the life of a circuit rider, instead of just reading about it, or writing about it, in blogs like these ;-).