A GLAAS half full?

The data revolution into practice

Akvo's lunch lecture at the Dutch Ministry of Foreign Affairs. 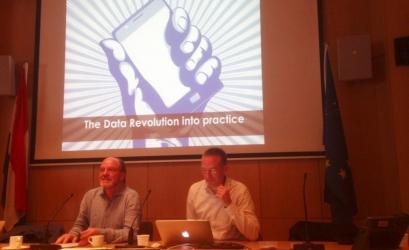 Almost ten years ago Akvo started as part of the Netherlands Water Partnership (NWP) with the aim to open up information about water and sanitation. Ever since then, Akvo has grown into an organisation of over 80 people, providing software as a service to multiple organisations and governments around the globe.

Influence of the data revolution

The presentation focused on how the (mobile) data revolution is transforming the international development sector. In Mali for instance, small-scale water point monitoring activities grew into a nation-wide monitoring system. The Akvo FLOW monitoring features are also being used at regional scale in a UNICEF monitoring programme in nine West African countries.

Furthermore, reliable WASH data are essential to evidence-based lobbying and advocacy by civil society organisations, which forms the core of the Watershed - empowering citizens programme, a partnership of Dutch Ministry of Foreign Affairs, IRC, Simavi, Akvo and Wetlands International. Having reliable data on the functionality of water points can help to attract the private sector in large-scale maintenance of hand pumps, like in Mali.

Akvo also shared new innovations such as linking drone data with ground data through mobile phone data collection to detect farmer yield, and also portrayed case studies about using information systems for disaster relief response in Vanuatu and Fiji. During the gathering, they also featured the progress made on the research and development of the Akvo Caddisfly tool, a tool to do water quality testing,with the use of a smartphone. The tests for fluoride (testing chambre) and salinity (EC sensor) are ready to use and the strip tests can be used for any parameter for which strip tests are available. The test results are shown directly on screen and can be uploaded to the Akvo Flow platform. Quick mobile based tests for e-coli are currently being developed.

Akvo emphasized that technology alone is not enough; the technology and data should be used within a broader system. "You can't drink data" said Kees Oude Lenferink (Dutch Ministry of Foreign Affairs), "people need to put data into practice; they need to act upon the data". Therefore Akvo often works with governments who are responsible for safe water provision.

To help governments and other relevant actors put data into practice, Akvo is developing the Akvo Lumen tool, a tool to facilitate the data analysis, visualisation and its dissemination. Mark Tiele Westra explained that Akvo Lumen will be a vital component of Akvo's 'Capture – Understand – Share' data cycle. It is a 'data to decision tool' to collect actionable data, like how many people are unserved, where do they live, how many hand pumps are broken?

Costs of the water testing tools

In the Q&A round I asked what it costs to use the water testing tools and whether these tools are affordable for local water committees. Jeroen van der Sommen indicated that the hardware of the fluoride tests currently costs about 30 euros. This price will decrease when production scales up. The users will also need to pay the yearly fee for the Akvo Flow platform.

Akvo is one of the consortium partners of the Watershed - empowering citizens programme, a strategic partnership consisting of the Dutch Ministry of Foreign Affairs, IRC, Simavi, Akvo and Wetlands International.

Donors who funded several of Akvo's initiatives were: DGIS, KfW, SIDA, World Bank and Danida, amongst many others.

A GLAAS half full?