She Makes Change - an update

The danger of software ‘slippage’

Mr Ragunathan, the ex-President of Ramianahalli village, proudly explains how his community had come together when facing a water crisis in 2004. But in subsequent years of 'times of plenty', much of the good practices of the village water and sanitation committee were lost. This is due to the dangers of software "slippage".

When I met Mr Ragunathan, the ex-President of Ramianahalli village, he proudly described how his community had come together when facing crisis in 2004. Due to drought the groundwater table had fallen in this part of Tamil Nadu so many boreholes which were used for water supply were running dry. Together, the community mobilised and funded - with some government support – the construction of a new, deeper borehole to fill the village reservoirs. The next day I met with Mr Raja, the current village President, who explained how pleased he was that his community were once again enthusiastic about saving water and willing to regularly pay a modest tariff. I asked "'once again', what do you mean?"

It emerged that these peaks of public motivation – in 2004 and in 2012 – corresponded with programmes designed to promote community participation in water supply. Back in 2004 the Tamil Nadu Water Supply and Drainage Board had piloted a new programme in the village in which its engineers were asked to build a close relationship with the community and help facilitate public involvement in efforts to address the village's source sustainability issues. This was initially through water conversation measures but later led to the investment in the new borehole. Despite the local success, the programme was ended in 2007 and the village went back to having a more conventional, bureaucratic relationship with the public health engineers.

From 2007 this meant that the enthusiasm that had gripped the village slowly disappeared. In some ways, this did not matter too much as the new borehole solved many of the problems with the water supply. Yet, during this 'time of plenty', much of the good practices that had developed were lost and the village water and sanitation committee that had earlier been established even stopped meeting, with the Gram Panchayat (local government) taking on the service provider role with little involvement from the wider community.

Over time as the groundwater table fell further, the reliability of the new borehole came into question and the village was once again faced with a potential crisis. Luckily, in 2012, two external interventions helped avert any significant problems. As you can read in the full case study report – the situation was undoubtedly helped by a significant bulk water scheme bringing surface water to the village – but the other important factor was the work of the Centre for Excellence in Change, a Chennai-based NGO, who ran an intensive six-month participatory drinking water security programme in the village. The work of the NGO helped motivate the villagers to again form a Village Water and Sanitation Committee, to take water conservation seriously and to regularly pay user charges for the precious water they receive. 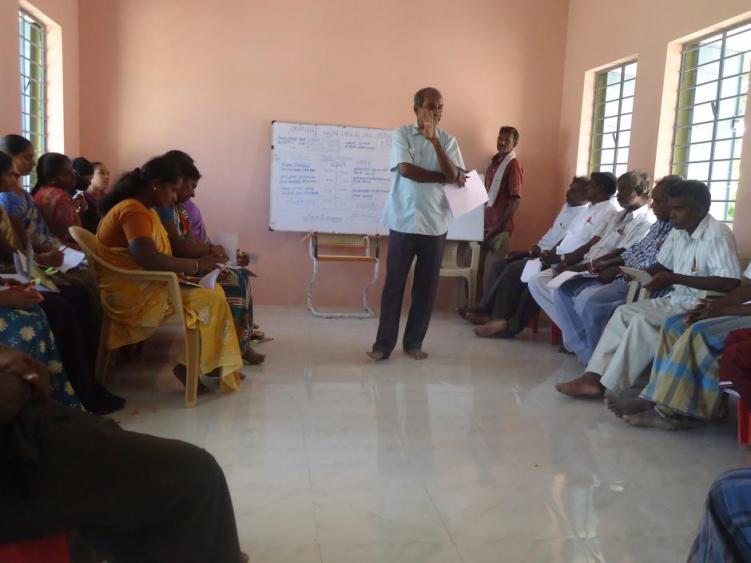 Hearing the two Presidents explain this tale of participation in Ramianahalli highlights the real danger of 'software' slippage that can happen. In this case the two interventions were 10 years apart which appears to be too long to prevent a significant deterioration in the level of participation. Going forward, one of the lessons I take from this case study is that such support can be effective but any impact is time-limited so if we are going to continue to promote participatory approaches for rural water supply then the sector needs to better consider how continued support can be provided with more regular 'refresher' interventions delivered.

She Makes Change - an update