Water & sanitation : how to make public investment work : a handbook for finance ministers

Creating “orphans” and “darlings” through aid in rural Burkina Faso

Donors have many competing concerns and this can have negative effects as shown in some villages in rural Burkina Faso.

Burkina Faso met its Millennium Development Goal (MDG) target for improved water supply in urban areas, but still missed the target for rural areas by nine percentage points; leaving almost 3.2 million Burkinabés without access to improved water. While water services in urban areas are provided by the state-run company National Office of Water and Sanitation (ONEA), rural water service provisioning is the responsibility of municipalities.  Apart from extending services to 3.2 million people, the Burkinabé government must improve current service levels in already-served rural areas to meet the Sustainable Development Goal (SDG) targets. The current policy for water services levels in rural areas does not meet the requirements for the SDGs.

When I started doing research on public finance in Burkina Faso, I found that the financial flows for water and sanitation appeared like a web rather than a stream. The research that I performed resulted in a working paper and briefing note about the use of public finance in Burkina Faso and its resulting impact on water and sanitation at the municipal level, which is briefly introduced and expanded upon in this blog.

Expanding access and improving existing water service levels in Burkina Faso’s rural areas requires major financial commitment. Public finance remains one of the major sources of financing for the water sector. One of the benefits of public finance is that it can provide relatively inexpensive financing for projects in commercially unattractive areas, using stable tax revenue to invest in poorer areas. However, an analysis of the public finances mobilised by the Burkinabé government for the 2007-2015 National Program for Water and Sanitation shows there is a bias towards the more commercially attractive urban sector, see figure below. 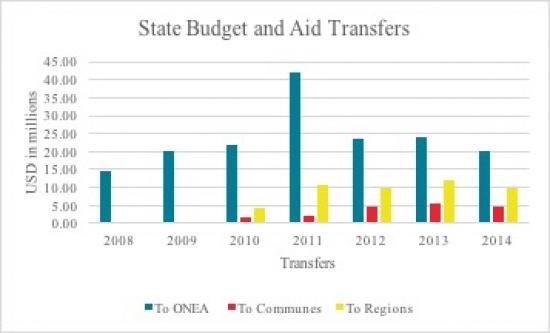 This is problematic because the minimal flows of public financial resources to the local level force municipalities to rely on other sources of funding for the development of their rural water infrastructure. These other sources of funding, such as donor funding, shape the development of water infrastructure. Donors have many competing concerns (e.g. managerial capacity of the aid recipient; accountability to the funders; ensuring aid effectiveness) when making funding decisions, which create “aid darlings” and “aid orphans.”

The distribution of donor aid creates “orphans” or overlooked areas at the local level. For rural water infrastructure development, municipalities are required to make Development Plans to implement the National Program at the local level. These plans are designed and targeted to direct financial resources for the construction of water infrastructure to the villages (rural areas of the municipality) with the lowest level of access to water.

Typically these plans identify the sources of funding as 1) public finance (as both transfers from the Burkinabe government and locally generated public revenue), in addition to 2) long-term decentralized partnerships with donors, but don’t include short-term project-based aid. In reality, the lack of public resources at the local level means that municipalities primarily rely on donor aid (in the form of decentralized partnerships and project-based aid) to develop water infrastructure. Municipal development plans are typically underfunded, resulting in municipalities relying on short-term project based aid that is not tied to the greatest need (as project-based aid is not included in the municipal development plan). The examples of the three municipalities of Houndé, Komsilga, and Banfora show that the level of funding is not necessarily tied to the village’s need.

By comparing the new wells constructed at the village level during the plans’ implementation years to the needed water infrastructure as stipulated in three municipalities’ plans, it was clear that donor aid was creating “darlings” while neglecting other villages as “orphans.” In each of the municipalities, from one-third to half of the villages had more wells constructed than what was called for in the plans, while the remaining villages had fewer wells constructed. The wells that were constructed were seemingly not linked to level of access to water, as some villages received no new wells even though they had the lowest level of access. Therefore the villages’ ability to achieve access to water was defined not on its need for infrastructure. Instead, due to the underfunding of the municipal development plans, the access to water was defined by a village’s ability to attract short-term project-based aid. Furthermore, this reliance on non-public sources of finance undermines the government’s accountability, ownership, and the development of public finance managerial capacity. This lack of capacity was cited by the central government as a reason for the minimal transfers to municipalities.

The urban bias and the related reliance on other sources of financing gives little hope for the development of rural water infrastructure in Burkina Faso unless changes are made to the system of financing. Given the higher service levels required by the SDGs, it is clear that Burkina Faso will have to mobilise substantial funding to achieve universal access in rural areas; a fact that seems unlikely given the Burkinabé government’s 357 million USD financing gap for the MDGs. It is unclear if Burkina Faso is really addressing the limited transfers to the municipalities, which will continue reliance on donor aid at the municipal level. Given that these resources are unequally distributed, Burkina Faso faces a real challenge for the achievement of universal access to water. There needs to be government commitment to mobilising financing and transferring resources to municipalities to invest in the equitable development of rural water infrastructure.

Where do we stand on the aid orphans?

Water & sanitation : how to make public investment work : a handbook for finance ministers