IRC and WASH specialists are working hard to ensure that the rural population is not abandoned in this time of crisis. 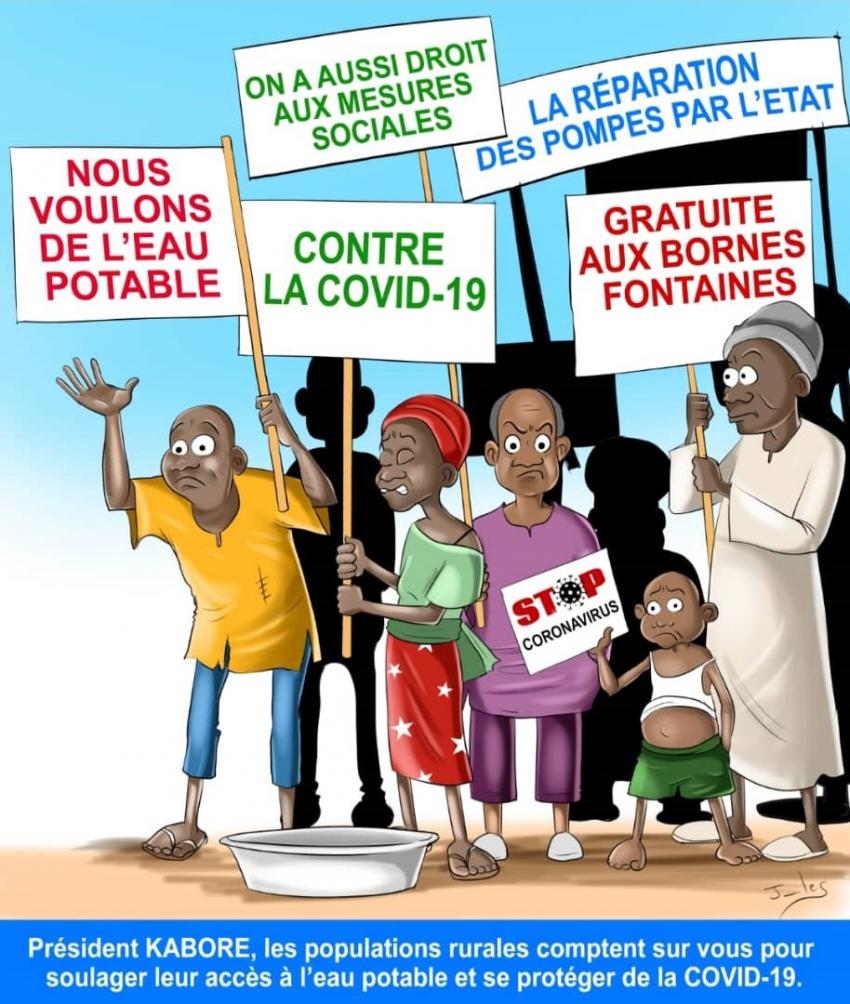 Juste Nansi is one of many anxious and frustrated WASH specialists in his country at present. As country director of IRC in Burkina Faso he has spent years working with the sector, especially government bodies, to promote the strength of a systems approach to securing water, sanitation and hygiene.

He is now alarmed at some huge gaps that have appeared in the public policy reaction to the coronavirus in this country. He is concerned that during the lock-down he and his peers – WASH specialists but not actual water and sanitation providers – lack sufficient access to influence critical decisions. Nevertheless, his voice is being heard.  He and his colleagues are working hard to ensure that the rural population of Burkina – 70% of the total population – is not abandoned in this time of crisis. As media reports in Burkina Faso make clear there are people crowded at water points where there is no water, and the advice to wash hands frequently is almost impossible to follow. The first cases of COVID-19 were reported in Burkina Faso on 9 March 2020. It was quickly taken seriously by Government as cases were reported a few days later within both the government and diplomatic community. Schools closed on 16 March and a nationwide curfew started on 21 March from 7.00 pm to 5.00 am. All markets closed from 26 March and Ouagadougou and seven other towns where cases had been reported were quarantined from 27 March. In common with most organisations, IRC has closed its offices and staff work from home.

On 2 April, the President Roch Marc Christian Kaboré announced a series of measures to address the crisis including that the Government would cover the cost of domestic water bills and some electricity bills. On 7 April the Minister of Water and Sanitation, Niouga Ambroise Ouédraogo, expanded on this at a press conference but referenced only those who are billed by the state-owned water provider ONEA.

It confirmed the growing fears that Juste Nansi had about what would happen to those who live in rural areas.  He felt he had to act. He had at least one tool at his disposal. A few years ago, Juste and colleagues had started a small WhatsApp group for water sector professionals in the country. By April 2020 Les Pros du WASH-BF had more than 190 members, including senior staff within the Ministry, and specialists working for donors, NGOs, the private sector and the media.

Juste put out a request for clarification. “I asked the group whether they could confirm that was what the Minister had said – that there is no provision for the rural population? I reminded the group that 70% of our population live in rural areas and they are the most vulnerable.”

The first response was from a senior official who said that he could not imagine there would be nothing for the rural population and he would check. But within an hour another member of the group shared a link to an article from the press conference. One journalist had directly asked the Minister who confirmed it would not cover rural areas. “People started commenting in the group that there should be something done, but none of the senior staff within the ministry reacted.”

Putting on the pressure through journalists

Journalists who follow these issues asked members of the WhatsApp group for clarification. On April 9 a piece by Morin Yamongbè appeared in WakatSera.com and later in lefaso.net saying “It is the 70% making up the majority of the Burkinabé population who have simply been forgotten in the application of mitigating measures by the State (taking responsibility for the water bills for average households).’’

On April 10, Reuters wrote about people struggling to get enough water in peri-urban Ouagadougou. One mother Rahinatou Diasso told them: “They say we must wash our hands, keep clean, and wash our clothes to prevent us catching the disease. We’d really like to, but if there’s no water it’s really complicated.”

Pictures appeared of crowds of people queuing for water, sometimes at taps that had run dry.

The pressure brought a reaction – if not a satisfactory response. On 15 April the head of communications for the Ministry of Water and Sanitation issued a statement saying that although the Minister had announced measures for the urban population “the rural population is not necessarily forgotten, a number of measures are in hand and will have an impact.”

The statement outlined the complications. In urban areas the Government can deal directly with ONEA which has 446,349 household connections and 3,486 public taps. In rural areas, they have to work through the General Directorate for Drinking Water (DGEP) in collaboration with the local government communes.  In total, 1,293 piped water systems serve about 5,172 public taps. About one third of these piped water systems are managed by private contractors, including NGOs, and almost two thirds by the communes.

The statement concluded: “The Minister of Water and Sanitation wants to reassure public opinion that the rural population are not forgotten, neither in the measures announced by the President nor in Burkina’s water and sanitation policies.”

Juste Nansi says it is the job of Government to tackle these complexities. “I think the Government did a great job by defining these measures, even if it is only clarified so far for urban people. But they cannot leave behind 70% of the population, and moreover the most in need. In rural areas the Government has to deal with at least 300 municipalities who contracted service providers, so we know it is much more complex. But this cannot be an excuse for not having clarity so far on the measures for rural water.” He notes that the statement of clarification did not even come from the Minister but from the Director of Communications- the third tier of Government. Disappointingly, the official report of the subsequent Cabinet meeting makes no mention of help for rural areas being discussed.

Nor is it only a question of money. In the most rural areas people usually pay only when handpumps breakdown. It is the dry season when many water points run dry in the day and people wait long into the night to fill their containers. Now they are supposed to close at 7 pm. Juste points out that water tankers are one option that has been used during past water shortages, but once again, only in peri-urban, not rural areas. “There are a lot of water shortages. If you combine this with the curfew when do you allow people to collect water? Even in peri-urban areas they cannot avoid crowding at the water points, so the water points could be a place of viral contamination.”

Salinata Atchougabou, a mother in a peri-urban settlement, told Droit Libre TV that they feel at risk. “People gather together when collecting water, but we can’t tell just by looking who has the coronavirus. If I am infected and we are too close, I could infect others with my breath.”

So what comes next? Juste and colleagues will keep pushing, using social media and a Facebook page Zéro Corvée d'Eau. “What I can do is raise awareness, getting more influential voices to raise the question at the right level and pushing the authorities to react. I learnt over the years that we WASH specialists are not that influential at the decision-making level. What we can do now is bring our expertise and experience to positively influence government decision making. But I am asking myself the question ‘what more can I do?’’

Part of his frustration is that those who have the ear of Government do not always press the right buttons. “You see all the people in the public health sector but none of them are talking about this. There is a widespread handwashing campaign, but they do not ask themselves where the rural people will find the water. If people have a limited quantity of water, they will not prioritise washing their hands, they will prioritise drinking. Unfortunately, nobody other than WASH people, are thinking about that.”

IRC has had many successes in Burkina Faso and is widely respected in the water and sanitation sector. There is a disconnect between IRC support for governmental institutions in improving rural WASH services and the relative exclusion it and the sector are currently feeling. It is time for the Government to listen to its friends. Especially friends with the expertise to support them.