Contextualising success and failure at three handpumps in Uganda

Case studies of the pay-as-you-fetch (PAYF) model in Kabarole District.

The 'pay-as-you-fetch' (PAYF) is an innovative approach that was adopted in 2016 by Kabarole district local government to improve the collection of fees for operation and maintenance. The model provides for a caretaker or operator of a hand pump to collect money for water on a PAYF basis and thereafter, as needed, use the collected revenue to maintain the water systems.

IRC Uganda with financial support from the Waterloo Foundation and the crowdfunding initiative "Running for water: keeping girls in school in Uganda" by IRC in The Hague supported the rehabilitation and institution of 15 boreholes with PAYF metres. This resulted in access to clean water for nearly 3,000 people.

In 2017, funding from the Conrad N. Hilton Foundation supported the introduction of a learning and reflection process and establishment of the District WASH Task Team that supported learning visits and meetings and initial documentation of the PAYF model. Additional funding from the USAID Sustainable WASH Systems (SWS) Initiative in 2017 strengthened the Task Team and enabled it to organise more learning opportunities and documentation of the PAYF model. This particularly focused on evidence of the benefits of the model and mechanisms to improve its operations in line with the Kabarole District WASH Masterplan.

The three case studies presented here are part of the USAID supported documentation and were compiled from open-ended interviews with several water point caretakers and stakeholders at hand pumps using the PAYF model. From the interviews conducted, additional information was collected to supplement a wider study on PAYF implementation in Kabarole District. 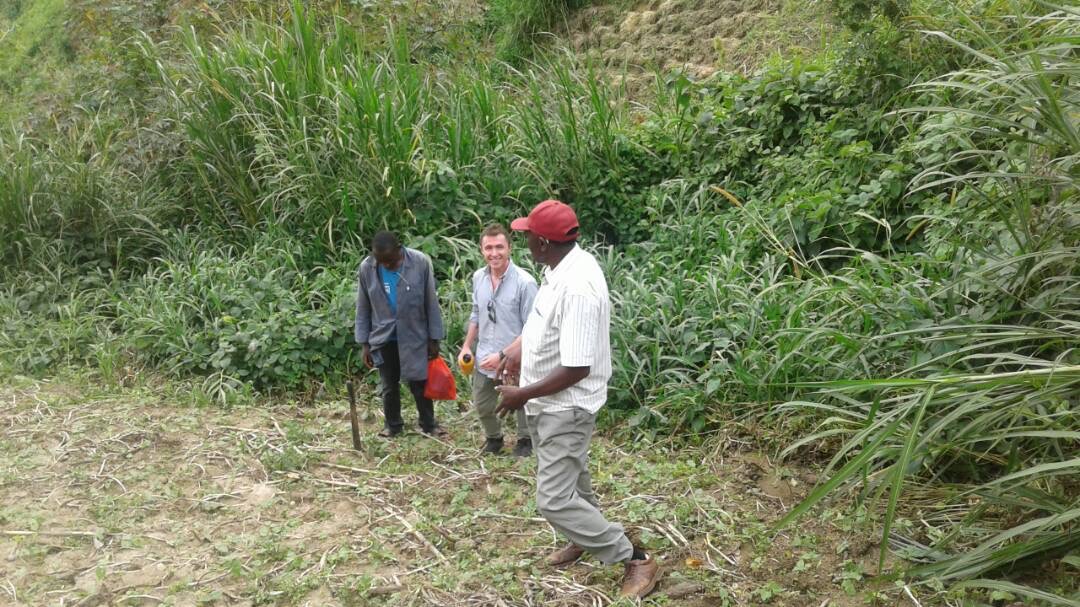 At the hand pump in Mukumbwe, a 20 litre jerrycan of water costs 50 Ugandan shillings (1.3 US dollar cents). Miriam is the water point caretaker and she feels that the water point is a great success; she enjoys the role. The process of appointing the right caretaker can be tricky but the position does not need to be constraining. Because Miriam is also a school teacher she appoints someone in her household to manage the tap when she is not around to ensure that water is always available. Community members can fetch water at any time of day, though it is locked when not in use.

For the most part, community members pay for water without complaint, although a few people still say that water should be available to the community for free. There is only one person in the community who formally doesn’t pay for water: the water point’s landowner. This was agreed by the community at the start of pay-as-you-fetch (PAYF) implementation, and records are kept on how much water she consumes. Some other community members, including the elderly, schoolchildren, and passersby collect small amounts of water for drinking without paying, though these instances are not recorded.

Funds collected are saved in a bank account through Post Bank and deposited by the treasurer at the end of each month. This money primarily pays for: routine servicing by the Kabarole Hand Pump Mechanics Association (KAHASA) at a rate of 30,000 shillings each time (less than US$ 8); routine cleaning by a community member; and for the caretaker, who receives 30% of the funds collected each month. The funds are also used to buy new padlocks when they are vandalised or wear out. A challenge faced by those who govern the water point is the seasonal variation of water consumption. The low level of funds received during the rainy season often reduces incentive and motivation for those who take care of the water point, as their pay drops significantly at these times.

In Mukumbwe, there is an informal system for those who are unable to pay at the time of fetching water where they can pay the caretaker when money is again available. The community does not have many alternative ways of fetching water except the National Water and Sewerage Corporation (National Water) which has set up a kiosk nearby. However, their services are not provided 24/7 and customers have frequently complained about the water being of poor quality. It is also more expensive than at Miriam’s hand pump; people say they prefer fetching water from her.

Many bulk users utilise the services of the water point, including brick makers, farmers, and construction workers. These users will frequently take upwards of 100 jerrycans of water at a time; according to Miriam, they may be willing to pay a higher rate due to the large amount of water being consumed. Many community members are interested in household taps, and have enquired about the possibility of extending taps to their homes. Some have also expressed interest in paying a fixed monthly amount for the water instead of paying each time it is fetched.

Miriam did not receive any training prior to becoming a water point caretaker but said that she could benefit from additional training. She expressed interest in meter reading, basic hand pump mechanics, record keeping, and finance management. She felt that other communities experiencing poor adoption of PAYF and community-based management could learn from her community and its story of success.

At the hand pump in Burungu, users pay 50 shillings (1.3 US dollar cents) per 20 litre jerrycan. Everyone in the community pays for water, and they all pay the same amount. The caretaker at the water point is Josephine, who says that the job has provided her with improved financial stability. She’s the second caretaker this water point has had since the rehabilitation: the first caretaker had other responsibilities and not enough time to dedicate to the job. The community’s Water User Committee is very active and Josephine has found them supportive. In fact, the committee’s chairperson joined the interview and provided insight into the water point’s functional status and context.

As in Mukumbwe, the elderly and passersby in Burungu can take small containers of drinking water for free. Community members do not always fetch water in 20 litre jerrycans, often bringing larger containers and demanding to pay the same amount for a larger volume of water. As with Mukumbwe, the water taken for free is never recorded. The number of jerrycans sold per day is also not recorded: Josephine simply records the amount of money collected at the end of each day.

Burungu has several bulk users, primarily brick makers, farmers, construction workers, and crop sprayers. At one point, the idea of charging bulk users a higher rate was considered but then abandoned due to competition from nearby National Water kiosks. These kiosks are more convenient than the hand pumps as they require less physical effort and time. The competition from National Water seems to be causing concern at this water point, although the magnitude of the problem is difficult to gauge.

Funds from this water source are saved in a bank account. The community is exploring the possibility of using the funds to improve latrines by purchasing sato pans (upgraded durable plastic toilet pans) which can minimise odours and germ transmission. KAHASA undertakes monthly maintenance services for a set fee of 30,000 shillings (US$ 8). As with Mukumbwe, the caretaker is paid monthly a percentage of the funds collected, which varies according to the season. The local Water User Committee (WUC) chairperson expressed concern about misuse of the hand pump, which needs to be addressed to minimise levels of servicing.

There was some vandalism at the water point initially but this subsided once the hand pump became a common feature. There are still water losses resulting from people fetching large amounts of water that is not paid for; continuing pumping after their jerrycan is full, and starting to pump before placing their jerrycan under the tap. In response, both the caretaker and committee chairperson suggested a practical session on best practices for using the hand pump. Josephine and the committee chairperson also commented that they had received no prior training, but would be interested particularly in improving their record keeping.

Unfortunately, not all PAYF stories in Kabarole are positive. The hand pump in Kanyamyegodi is non-functioning after a recent breakdown and has scarcely operated under PAYF. When the system broke down there was no money to pay KAHASA for servicing. KAHASA has known of the community’s difficulties for a while, having played a longstanding role with them as part of the initial PAYF pilot process in Kabarole. They believe many of the problems pertaining to unwillingness to pay in Kanyamyegodi stem from politicians reinforcing the notion that water should be free and making empty promises to provide free services.

Even when water tariffs were being collected in Kanyamyegodi - which last happened in March 2018 - very few people actually paid. There was no formal system for deciding who received free water, although water was often given to children, the elderly, the poor, the sick, and agricultural users for irrigation, for instance. Few records were kept on water usage and funds collected through tariffs. The caretaker has never been paid, and at the time of this interview, was not even available to provide input, having left once the water point failed. This interview was therefore conducted with several community members who were present at the site. 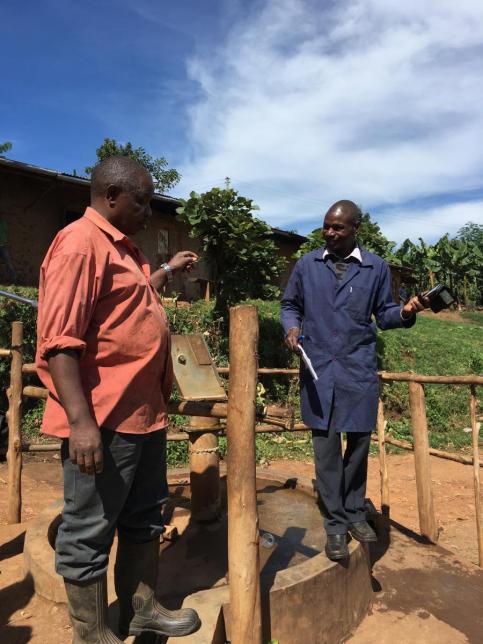 During the interview a heated discussion arose between KAHASA and the community members who insisted that the system be repaired, but were unwilling to pay for the repairs. Since KAHASA is a business relying on payments for their services, they are unable to work for free. Community members have even reached out to private contractors about fixing the hand pump, implying that relations with between KAHASA are strained.

Community members generally regarded service delivery at this handpump to be of poor quality, even when the system was functional. Many said they stopped using the hand pump because it was too difficult to operate and took too long. Water leakage was a common problem, and there was often no water available at all. There is also a local water vendor with his own hand-dug shallow well in Kanyamyegodi, who charges higher rates (1000 shillings per jerrycan, as opposed to 20 shillings per jerrycan at the hand pump). Since people can get water quickly and easily from this vendor without having to pump, some are willing to pay the higher price for convenience, despite the health risks that are inherent when fetching water from open, unprotected sources.

Others in the community retain their strongly-held beliefs that water should be free and collect water from alternative sources such as a nearby stream. Interestingly, many of these people admit to knowing that this water is unsafe for consumption. Others argue they cannot afford the water tariff.

Another hand pump that has had no success operating under PAYF exists nearby, in the community of Kabisokoro. The hand pump has never operated under a tariff scheme, though it is still functioning and has never broken down. A community member at this site mentioned that many people from Kanyamyegodi walk to Kabisokoro to use the free water there. Unfortunately, no caretaker was available to talk about Kabisokoro’s hand pump during the site visits.

The Water User Committee chairperson was present during the community engagement and even provided his contact information for follow-up. Unfortunately, the WUC in this community failed to enforce the bylaws laid out in the initial Memorandum of Understanding. Community members at the site said they wanted their hand pump fixed and were willing to pay to keep it working. However, they have said this before and failed to follow through. This situation is likely to continue if it is not addressed in future interventions. 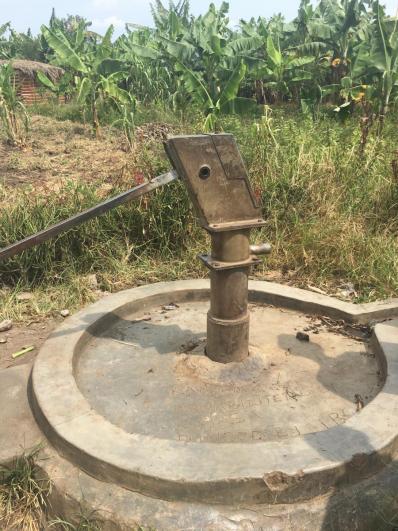 Analysis on IRC's use of Pay as You Fetch : Kabarole district, Uganda

Guest Blogger: Caleb is a PhD student at the University of Colorado at Boulder in the United States