RT @VEI_NL: We are happy to announce that @PWNwaternatuur is the newest #partner of VEI. Together, we will pursue our shared dream of unive…

The costs of getting spare parts for handpumps can sometimes be higher than the costs of the parts. But a new SMS-based system might help.

Imagine a handpump where some of the nuts or bolts have worn out. These might cost a dollar at a spare-part retail dealer; but the bus ticket to town might cost three dollars. That is not a big amount, but it is three times the price of the spare. It is not only the price, but the time spent on enquiring about prices that is a problem. The caretaker may travel to town to enquire about spare part costs, and upon his return realise its price is higher than what the water committee has in its bank account. He will need to go back to the committee, who then do an “extra fee collection” among the users to buy the spare. While all of that is done, the handpump is standing idle, waiting for the repair to happen.

Will this revolutionise spare part supplies? Our first indications show that gains may be made, but they are modest.

Or, worse, the area mechanic may cheat on the caretaker. In Ghana, there have been instances where area mechanics buy spare parts on behalf of the committee, for let’s say US$50, but then charge the committee US$70 for it, as the committee has no way of verifying the costs. Mobile phone apps and SMS services have the potential to reduce the time and money involved in the supply chain. In Ghana, the company SkyFox Ltd is starting to pilot an SMS-based system for the purchasing of spare parts and the contracting of services of an area mechanic, with the objective of reducing the transaction costs and times, and eventually reducing down-time of handpumps.

The system works as shown in Figure 1. When a pump breaks down, the caretaker sends an SMS text to an area mechanic, who then comes to assess the situation and advice on the repair to be done. Based on the repair that needs to take place, the caretaker sends an SMS to a registered spare supplier to inquire about the price of the spares. This cannot only save on the transport costs of doing the enquiry; payment of the spare part goes via mobile banking, avoiding the need to travel to town to go and buy it. Instead, the supplier sends the spare part via public transport to a place near the community for example a district office building – where the caretaker can pick it up, again avoiding some travel costs. The area mechanic then receives an SMS telling him that he can come back and do the repair. For every step in the chain an SMS is sent, so that centrally a tracking system show whether repairs have been completed, in how much time and at what cost. 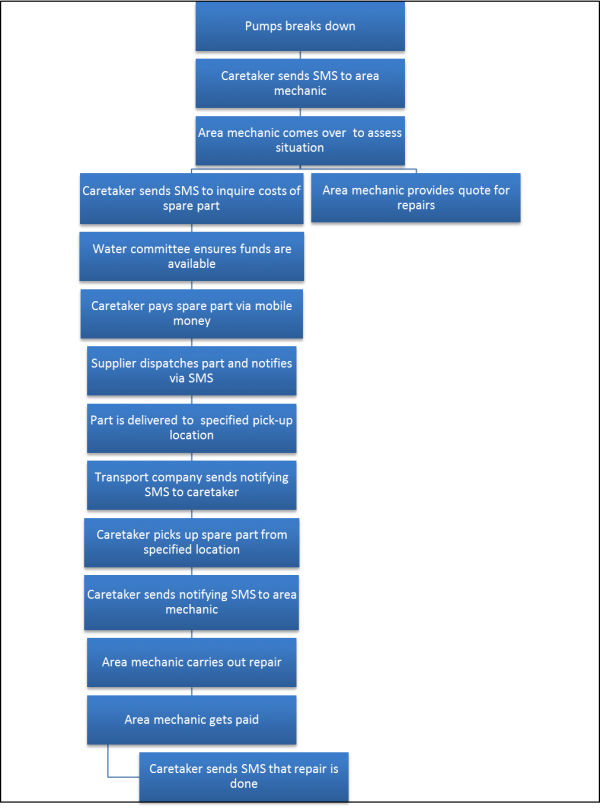 When comparing that with Figure 2, that shows the current flow, one can see that the SMS system is longer with more steps involved. However, as all steps are SMS-based, there might be savings on the costs of travelling and enquiring, and above all on the time spent on that. Moreover, the current flow often doesn't take place fully, and the pump doesn't get repaired, as shown in the figures of unreliability of handpumps. 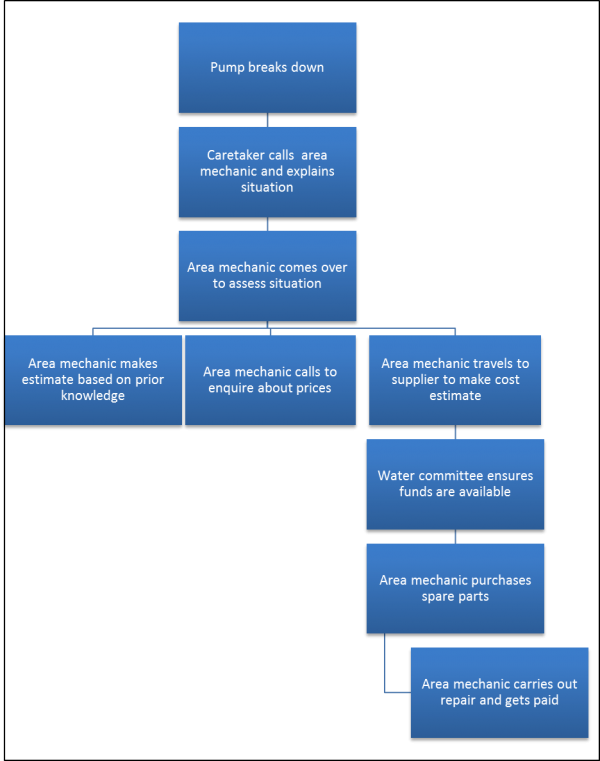 Will this revolutionise spare part supplies? That is the subject of research that Triple-S in Ghana is about to start around the SMS pilot. Our first indications show that gains may be made, but they are modest. A survey among 20 communities in the district of Sunyani West showed that the costs of travelling make up about 5% of the total annual repair and spare part costs. So, at most a 5% saving can be made, and even with the SMS system some travelling will be needed. The same goes for time. Elder Joe, the secretary of a water committee on the outskirts of the town of Odumase, explained that the last repair that they had to have done took 14 days, whereas the national guidelines indicates that 3 days is the maximum duration for a pump to be down for repairs. In this instance, spares were not a problem. But the area mechanic was away for a week doing repairs in another region. Moreover, the water committee only bothered to call the area mechanic after the pump had been broken down for 4 days, as they had another water point nearby that served as back-up.

Apam Abraham Larbi, one of the area mechanics in Sunyani West, also explains that the problem is often not with getting spares. For the last repair that he did, he was called by a committee whose pump had broken down two weeks earlier. They only called him when the committee had collected extra funds from the users so they would be able to contract his services. And when he went there, he was able to do the work within the stipulated three days, as he carried a stock of commonly used spares with him.

All these are instances where an SMS service would have only made a minor impact in terms of costs and time savings. Over the coming six months or so, we will try and get more to the grain of where the bottlenecks are. The SMS system will allow us to track all the time and expenses made on repairs. We will compare those data with logs of repairs of past repairs and of villages that will link up to the SMS system at a later stage. Even if we would find that the savings in time and costs of the SMS system are modest, it will give us very good insight into the actual bottlenecks with spares and repairs.

Though maybe initially the benefits of the SMS system may be modest, we expect this research also to identify ways of improving and expanding the facilities offered by the SMS system so it can have a bigger impact. One could imagine that different spare suppliers put their price lists on the system, so a community can choose the cheapest – even including the costs of sending it. Similarly, the area mechanics can make their prices available, so communities can contract the ones that offers best value for money. It will take a while before this will be the Amazon.com for spares and repairs in Ghana, or even before there will be fully-fledged spare-app. But if such steps eventually could be made, hopefully it can contribute to ensuring that repairs are indeed carried out within the suggested three days and for a fair price.