The capacity to deliver water services

Local government is a critical level that needs strengthening if Ghana is to achieve its objective of sustainable water for everyone by the year 2030. It is, as Chris Dunston, senior programme officer for Hilton Foundation international programmes, puts it “where the rubber hits the road”.

In 2014, the Conrad N. Hilton Foundation gave a US$ 3 million grant for Strengthening Local Government Capacity to Deliver Water Services, building on the work of the past decade and expanding the number of districts that had been supported under the Triple-S programme from three to 13 in five regions.  IRC took a leading role as an organisation working for many years to build capacity and skills in planning, financing and monitoring.

One aim was for all Hilton grantees to work more closely in these districts with the Community Water and Sanitation Agency (CWSA), the district authorities and with each other. These include big players like WaterAid, and World Vision, as well as Safe Water Network which promotes an enterprise approach in small towns and peri urban areas.

After some initial suspicions (the first meeting required an external facilitator!) the NGOs embraced these partnerships. Mohammed Abdul-Nashiru, country director of WaterAid Ghana, points out how the district-wide approach and partnership between providers and the district is addressing the needs of whole populations. “Times were when you just go in and provide one service for 350 people and move to the next district or next community and so on. But that is changing. … [Now] you find the district leadership mobilising actors to deliver one particular plan. So we stay in a community or a district and work until they hit a full 100% before we move out.”

The Local Government Service had estimated that around 80% of Water Units in District Works Department were under-staffed or had underqualified staff who had little influence in district authority decision making. In the 13 project districts these teams have been strengthened, empowered, invigorated and motivated. They know how to collect and analyse data, plan sustainable finances and prepare District Water and Sanitation Plans and they work closely with Water and Sanitation Management Teams that manage facilities in the communities. 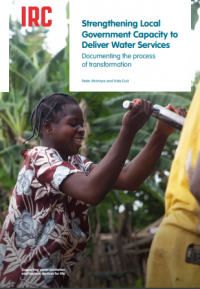 If you sit in a meeting of the Kintampo South District Learning Alliance Platform in Brong Ahafo Region of Ghana, you will see community leaders and district assembly staff visibly strengthened as they share experiences.

You might hear Ebenezer Kwarteng, district assembly member for Jema, admitting how attempts at collecting from households for water payments hit a roadblock. “Some paid and others did not. And because of that they all decided not to pay at all. So we decided not to collect the money. We stopped.”

With the help of Daniel Nyamekye, district development planning officer and desk officer for WASH he convinced people to protect their water supply. “We told them it is not free because when it is spoiled we are going to repair it, so … now they are all paying as they fetch.”

At the Upper West Regional Learning Alliance Platform (RLLAP) meeting in Wa in northern Ghana Abdulai Ali, district assistant planner for Wa East, outlines the district plan to achieve 89 new boreholes and more than 100 repairs to provide full coverage by 2025. He was challenged by one of the stakeholders – what will happen if there is donor fatigue and no outside money? Abdulai Ali is sure the district will find the funds. “We are committed in providing water to the communities that are under our catchment area.”

Martin Dery, chairman of the coalition of NGOs in water and sanitation (CONIWAS), warns against expecting change to be rapid. “People have lived for 50 years plus with a particular way of doing things, and we are introducing a new way. We need to persevere. Changing mind-sets is not something that you can achieve in five years; you may not even achieve it in ten years.”

But change is occurring. John Godson Aduakye, CWSA Regional Engineer, said that the six project districts in his Northern Region stand out in their ability to plan, argue the case for resources and interact with communities.

“These districts have registered all their assets and documented which of them need improvement. They have costed for that improvement over time and know where they have to go and do maintenance. They have educated communities about how they can communicate with their office and the area mechanics to help them with the maintenance, and they are able to do these things in a shorter interval than the other districts. They know what they are about and they know where they are going.”

This IRC publication examines how such change has come about – looking at partnerships, district planning, learning alliances and impact at community level.

Now that this project has come to a close the acid test will be whether the district teams and the learning alliances continue to develop and strengthen services at community level and how well the district water and sanitation plans are put into action.