Bringing clarity to the WASH system

Interview with David DeArmey of Water for Good about using IRC tools in a fragile context. 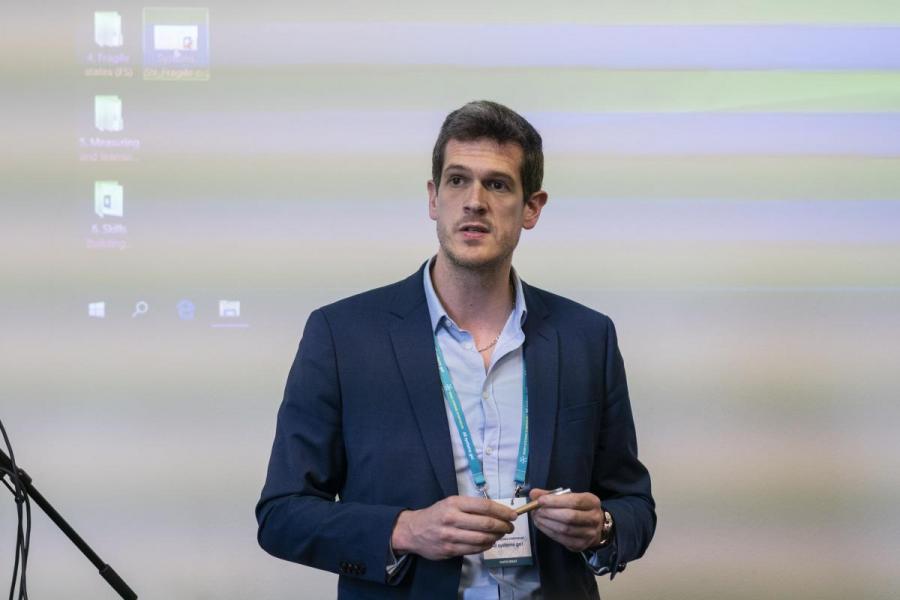 Water for Good works in the Central African Republic (CAR) to provide people with clean water. David DeArmey, as director of international partnerships, has been part of the organisation for seven years. The focus of the organisation has been mainly on infrastructure and maintenance but since a couple of years they have been looking into how to make a water, sanitation and hygiene (WASH) system function. That is when they discovered IRC’s WASH systems framework and building blocks. This has helped them put definition to an environment that they had a hard time understanding.

Q: Which IRC tool have you used?

We have been using the building blocks analysis tool at district level in the Central African Republic. We have been doing district-level strengthening over the past three years. It was important to bring definition to the entire system, what the needs are, where the weaknesses and strengths are. When we get passed using that tool, we hope to be able to use other tools like the life-cycle costing, but we are not there yet.

Q: How did you introduce the tool in the district?

Long before we started applying the analysis tool, we had been engaging with different WASH sector authorities at regional and national levels. We made a lot of efforts to build relationships with sector authorities by communicating more transparently, by sharing our data and plans, and by looking for practical ways to involve them in our progression.

After introducing the baseline assessment work we had done in 2018 at the Mambéré-Kadéi prefecture (district) level, we began engaging with sector authorities and actors on how to implement the plan. The intention was to re-establish a government ownership position of the plan and allow them to exert their role and authority according to sectoral needs. This enabled us to look at the WASH systems framework and building blocks together. While we began planning together, introducing the building blocks tool was easy in the sense that it was sort of a natural next step in the process of identifying how to implement the prefecture-wide plan. It was an easy way to get everyone on board with common definitions and concepts outlined in the tool. Especially for the local WASH sector authorities, it has been very interesting, because they did not have a very clear idea of what the sector is supposed to look like. Sitting down and going through each question to analyse each building block has been an encouraging exercise for them; it brings clarity to a system that seemingly does not exist in a fragile country like CAR. Now they know there are things in place. It just takes time to actually look at and define the building blocks.

Q: Have you had the opportunity to use the tool outside a fragile context?

We have not, but I have looked at the results of the building blocks analysis done by different organisations in more stable countries. Although it does look somewhat easier in those contexts, it has made us realise that all the components of the WASH system also exist in the Central African Republic. We may be starting more at the ground level, building up each building block sometimes from scratch but the foundation is there. Just like in any country, in any context, the building blocks are there, they may be dormant or inactive, but they are there.

Q: Do you know the WASH Systems Academy, and have you used it?

Yes, I have done both the introductory and the building blocks courses. The courses have given definition to the principles and concepts for each of the building blocks. This has helped us in the way in which we engage in discussion during the analysis.

Q: Would you recommend the courses to WASH actors?

It is indispensable. People need to have a basic understanding of the concepts. If you don’t have that then you cannot really build up the system in a systematic way. Thankfully the building blocks and the analysis tool are simple enough to be applied in most contexts. In the Central African Republic where the sector is extremely weak, all the actors who have been involved in the analysis have picked it up very quickly.

Q: Did you face any challenges?

One of the biggest challenges was time. The WASH sector at district level is weak in terms of presence and authority. There are so few people and they are extremely busy that it is hard to get them together and go through each building block. Also, common definitions needed to be agreed upon therefore more time had to be spent on in-depth discussions of concepts. The easy part has been building qualitative data for each of the building blocks for all the questions. The discussion is so rich that we learn a lot of things. Another challenge relates to the scoring of the building blocks. This is a sensitive issue because some of the district authorities may feel a little threatened by weak scores. They realise that the analysis results and summary might be shared at national level possibly leading to criticism from their superiors. It is a bit of a challenge, but I think it is also part of the process. Even though we know that the scores are relatively subjective, the important thing is to stress that the point of it is to see progress over time.

Q: How do you deal with that sensitivity?

First of all, you need to define the positive aspects of what is there and make sure you communicate that to everybody. And rather than pointing out the weaknesses you focus on improvements to be made. A weak sector is also an opportunity to be pioneers of the sector. Wording is important. Stating something is weak or bad does not serve much use, it is critical to look at what is missing as an open space for collective construction where everyone is part of the programme. The qualitative work and narrative around the scoring is an excellent place to position everyone positively. A positive outlook is really important in a fragile country like CAR.

Q: You also worked with Water Mission in Jinja, Uganda, not in a fragile context. How was that?

It was a great opportunity to work with them. Even though we are working in different contexts, we are asking the same questions. My biggest take-away from that is that everybody recognises the importance of involving local government. We can get wrapped up in what we do and feel like we need to manage the entire system forever. That is not going to happen. Coming together with Water Mission and discussing the WASH system and the building blocks was a real eye-opener for them as it gave them a sense of direction. We cannot control all the building blocks; we are only involved in specific ones. We see how our work influences the other ones and it gives us practical ways to start engaging with actors who are either in charge of or involved in the other building blocks. This makes us think more collectively.

Can you strengthen WASH systems in fragile states?

Understanding the WASH system and its building blocks : building strong WASH systems for the SDGs