Bringing empowered voices to the table

Roadmap to sustainability : phase out strategies in the WASH sector

The Bangladesh Paradox: exceptional health and sanitation advances despite poverty

Bangladesh has made tremendous progress in the fields of health and sanitation. With a population of 149 million, it now has the highest life expectancy; the lowest fertility rate and the lowest mortality rate of children under five in South Asia (excepting Sri Lanka), although it spends less on health care than most neighbouring countries. Only 10% of the population in Bangladesh practices Open Defecation (OD) compared to 50% in India.

It is one of only six countries that are on track to achieve Millennium Development Goals 4 and 5 on reducing child mortality and improving maternal health.

Emerging from the war of liberation in 1971, Bangladesh embraced a new more liberal identity, which manifested itself in a change in societal attitudes towards women, and girls’ education in particular.

How did Bangladesh pull this off? During a recent lunch meeting organised by IRC and the Netherlands Water Partnership at the International Water House in The Hague, Dr. Mushtaque Chowdhury gave a presentation on the Bangladesh health paradox, drawing from his article published last year in The Lancet. His organisation, BRAC, of which he is Non-Executive Vice Chair and Interim Chief Executive Officer, has played an important role in transforming Bangladesh from a  “basket case” 42 years ago to an exceptional health performer now.

Government commitment to social welfare and health, donor support and pluralism in health care, allowed NGOs like BRAC to flourish. Unlike many countries that are increasing restrictions on NGOs, Bangladesh has created a more NGO-friendly climate for instance by creating an NGO affairs bureau to fast track the proposal approval process.

BRAC is one of the organisations that has contributed to and benefitted from this burgeoning NGO sector. With 120,000 employees in 12 countries and an annual expenditure of US$ 718 million in 2013, BRAC is the largest NGO in the world, reaching an estimated 135 million people. Since 2006, The Netherlands supports a large water and sanitation programme (BRAC WASH) that covers more than half of Bangladesh and in which IRC acts as a knowledge partner.

What makes BRAC attractive and successful is its business model, based on 70% own funding while the remaining 30% is provided by donors. Some 50% of the profits BRAC derives from its microfinance service and 18 other social enterprises go towards development projects. The other 50% is reinvested in the enterprise themselves.

When asked if BRAC will ever become 100% self-reliant, Dr. Chowdhury replied with an emphatic “no”!  Soliciting for funds from donors creates a competitive environment, which boosts/breeds innovation. BRAC will continue soliciting for the 30% or so funding from donors.

Dr. Chowdhury also does not believe that trade can completely replace development aid. Micro-loans only work if they are linked to the market, he said and the ultra-poor will never be able to pay market prices.

Donors make a mistake if they pull out of countries like Viet Nam when they reach a middle-income status. These countries still harbour huge numbers of the very poor. Continued investment is needed.

BRAC has a strong research culture with links to programme implementation, focusing on solving problems and testing the effectiveness of its interventions. In collaboration with the University of Toronto  and social enterprise PurifAid, BRAC, for example, is trying to address the arsenic poisoning problem by testing appropriate filters. In the 1990s, arsenic contamination of groundwater attracted a lot of media attention but now it has become a "forgotten story" that still affects 30% of the population. A BRAC WASH II action research project, ASTRA, is developing a decision-support tool to help deliver arsenic- and salt-free drinking water in Bangladesh. 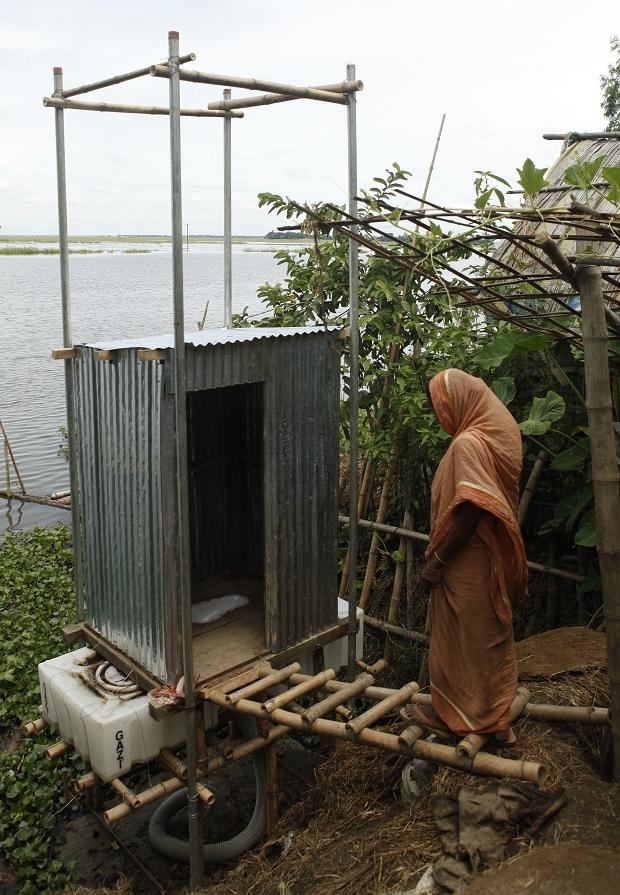 Providing sanitation for marginalised communities in wetlands is a daunting problem. There is little space for latrines and frequent flash floods wash them away. The BRAC WASH programme is experimenting with an innovative solution: the floating latrine. Sludge management remains a challenge.

Moving forward: changing roles in the South and North

BRAC's role is shifting from implementing services to quality assurance. As government takes over the responsibility of service provision, NGOs like BRAC can help support that transition.

If southern NGOs like BRAC start expanding their operations to other countries is there still a role for NGOs from the North? Dr. Chowdhury believes there is. He still values the technical support BRAC receives from organisations like IRC.

Advocacy efforts can benefit a lot if southern NGOs team up with their northern partners, Dr.Chowdhury believes.

"It is easy to reach service coverage rates up to 60-70%", Dr. Chowdhury said, when asked how he thought BRAC could contribute to the post-2015 Sustainable Development Goals (SDGs). "We can’t use the same approach to reach the remaining 10-30%. We have to think differently".

Bringing empowered voices to the table

Roadmap to sustainability : phase out strategies in the WASH sector