Water provision is one of the most complex services to be provided and maintained in a refugee camp. Given the fact that water is essential for people's health, it is very important for donors and implementing partners to guarantee a proper level of water service to everyone everyday.

Understandably, the agencies and implementing partners need to check that the targeted level of service is effectively provided to refugees. Surveys are frequently used as a means to acquire the information needed and a common practice in refugee camps is to hold a household survey.

For piloting the life-cycle cost approach (LCCA) in Bambasi camp in Western Ethiopia, IRC in collaboration with UNHCR, the Administration for Refugee and Returnee Affairs (ARRA) and the Lutheran World Federation (LWF) conducted a specific survey which meant interviewing all the refugees that were fetching water from half the water points located in the camp over four days in July 2014.

The pilot seeks to support better planning and effective management of the provision of water in refugee camps and settlements. LCCA can be described as a cost/benefit analysis where the benefit is the level of service resulting from the one-off and recurrent expenditure made on the provision of water. In our previous blog (see link below) we explained that this benefit should meet agreed levels for four indicators.

The main purpose of the water point survey, therefore, was to collect data in order to compare effective levels of service provided to refugees in Bambasi with the water service ladder developed in collaboration with UNHCR. Survey was the main tool to get information on three out of four indicators of the service ladder, namely the quantity of water that refugees fetch per day, the distance from each household to the water point and the crowding at each water point. In order to get the information on the last indicator (quality of water), water testing was conducted for all 20 surveyed water points.

Bambasi refugee camp is located at Bambasi woreda in Benshangul Gumuz Regional State, Ethiopia, and is 45 km from the regional town Assosa. Nowadays the camp is housing 13,847 refugees. The camp was opened in April 2012 and since December 2012 water has been supplied through a gravity piped scheme to 37 tapstands (each counting 8 taps) located in three zones. The water distribution in the camp works six hours per day: 7 - 9 am, 11 am - 1 pm and 4 - 6 pm. 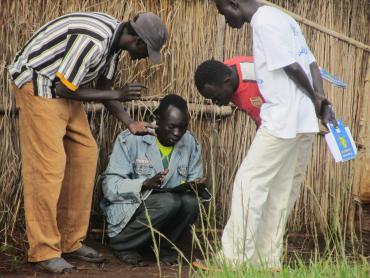 During four days 49 data collectors were posted at 20 tapstands (in pairs at low- and medium-crowded water points and in trios at high-crowded water points) in order to count and identify the users of the taps in terms of status (refugee or not), household size (users' families) and location (distance from home to the tap), and to quantify the water each user's family consumes per day.

Water point sampling was based on crowding, and was representative for each zone, because refugees would not go to from the zone they live in to another to fetch water. Therefore in our sample, for each zone in a camp we included high-, medium- and low-crowded water points.

Data collection was done with an Open Data Kit (ODK) application on tablets and backed up by a paper questionnaire for quality control purpose and to cope with potential technical issues. All data collectors were refugees from the camp, and though they had done a survey before, none of them had ever used a tablet. A two-day workshop was organised prior to the survey to explain the purpose of the survey, train the data collectors on the questionnaire and the use of the tablets, discuss and validate the classification of water points in terms of crowding and agree on the overall organisation of the survey.

Then the survey could start. The four days were necessary to capture all the users of the tap stands, including those who do not fetch water every day. The period included the day of the week when the practice of fetching water differs due to the scheduled prayer hours, in this case Friday. Within these four days, it is possible to calculate an average quantity of water per day, at least for the season when the survey takes place. Over four days 5,105 questionnaires were filled in and, as intended, half of the camp population was reached.

The survey was a success which could be attributed to the high commitment of the partners involved in this project, namely UNHCR Assistant WASH officer Simeneh Gebeyehu and LWF WASH officer Alemayehu Godebo, as well as the reliable support from the UNHCR Assosa field office staff and ARRA. 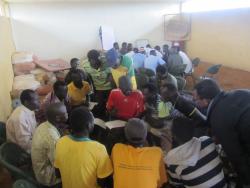 Building up a team spirit between partners and data collectors was also crucial, and it helped to increase the surveyors' awareness of the importance and the purpose of this survey, as well as its possible effects on the refugee community.

On several occasions we rely on the refugees' knowledge of the camp and it turned out to be the best way to work:

Constant supervision and regular debriefing during the survey essential 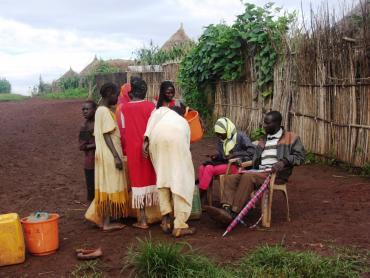 Constant supervision at the water points during the data collection was very important as problems could be dealt with immediately. An additional benefit was the building of a sense of ownership and team spirit, so the surveyors felt that they were left alone during the process. A meeting point in the middle of the camp was chosen to meet up with the surveyors between water distribution slots to:

Open and honest communication with everyone involved in the process

It was extremely important to ensure an open and honest communication with all agencies that were directly and indirectly involved in this survey. UNHCR's main government counterpart and implementing partner in Ethiopia - ARRA had been timely informed and provided us with the support we needed. For example they briefed the population beforehand on the survey to be conducted in the camp and that the refugees needed to carry their UNHCR identification cards (IDs) with them to the water point for the purpose of the survey. They also repeated the announcements on our request during the duration of the survey.

In Ethiopia, UNHCR, ARRA and implementing partners have nationally agreed a mode of payment for refugees for skilled and unskilled work, which IRC adopted for this particular survey work. Through clear and direct discussions at the beginning of the process, the surveyors were informed about the mode of payment for their work.

UNHCR has security travel procedures which can restrict the time available for this type of survey. However, alternatives for overcoming this obstacle are available and include either finding accommodation closer to the camp or getting authorisation (based on the country-specific security context and advise from the UNHCR security focal person) to arrive early and depart later than the official security time set in a particular region for the duration of the survey.

Having refugees carry their ID to the water points during the survey period was challenging. Though specific numbers were given to refugees in case they forgot their ID and each person clearly asked to bring their ID with them the next day in order to link up the specific survey number with their ID, identification remained a challenge. For this pilot, however, it is crucial to know each household size in order to calculate a quantity of water per capita per day.

Is it relief or is it development
Costing water services in humanitarian context: setting up the ladder