Next year the Millennium Development Goals will make way for their successors: the Sustainable Development Goals. What does this mean for global development? What should the new targets include? Organisations working in water, sanitation and hygiene closely follow the making of the new agenda. 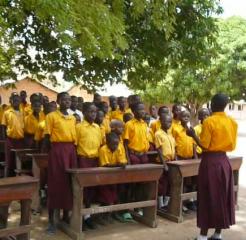 We are close to 2015 when the Millennium Development Goals come to an end. The eight targets set in 2002 formed a blueprint for development and resulted in unprecedented efforts to meet the needs of the world's poorest. But to provide access in water, sanitation and hygiene, we still have a long way to go. Sanitation being the most off-track, still 2.5 billion people lack improved facilities. That is 36 % of the world's population.

In the run up to November 2015, when the United Nations post-2015 summit will be held and the Sustainable Development Goals for 2030 are expected to be formalised, the debate has revived: What should the goals include? And who sets the agenda? Lobby groups do their best to get the most important issues on the table.

Lobby groups work hard to get most important issues on the table.

For water, sanitation and hygiene, a leading influential body is Sanitation and Water For All (SWA) - a global partnership between donors, developing countries, organizations, NGOs and development banks. This week on 4 and 5 December, the SWA Steering Committee will meet in The Netherlands and will discuss the role of its members in their efforts to ensure that water, sanitation and hygiene are recognized as priorities in the post-2015 development agenda. It will also address the partnerships role in support to implementing the Sustainable Development Goals, once formally defined.

Ambitious, but not enough

The proposed goals for 2030 as they are now, aim at achieving universal access. This means reaching everybody with a quality and sustainable service. This is ambitious as it implies overcoming inequity and providing service to those who are difficult to reach, including the poorest and most vulnerable groups. It sounds promising. And although water is envisioned to have a central role in the Sustainable Development Goals, some parties in the sector are concerned as they observe that universal access to water and sanitation should also mean access to safe water and sanitary facilities in schools, health clinics and at the work place. Therefore the Dutch-based NGOs Simavi and IRC in cooperation with the Dutch Ministry of Foreign Affairs, are bringing this concern to the attention of the SWA Steering Committee, requesting the SWA partnership to take an active role in advocating for the inclusion of extra-household facilities in the water target for universal access.

On 4 December, IRC and Simavi will host an informal side event at the Mauritshuis in The Hague - home to Dutch master pieces from the Golden Age such as Vermeer's Girl with a Pearl Earring - where the Steering Committee of SWA will meet the Dutch water sector. During the event, Dutch parties will have the opportunity to share their views and experiences in providing access to water, sanitation and hygiene in schools, health care facilitates and at the workplace.

Special guests at the event include Dutch national soccer player Aron Winter, and Catarina de Albuquerque, the newly appointed Vice President of SWA. In 2009 she was awarded the Human Rights Golden Medal by the Portuguese Parliament for her excellent work in the field of human rights.

What should the new targets for water, sanitation and hygiene include? Tell us what you think.