RT @dietvorst: Good luck with your lobby for budget allocations for #water service providers. Good photo: you can only afford better #WASH…

IRC Burkina Faso saw the election campaign as the ideal opportunity to bring water and sanitation to the forefront.

In October 2014 Burkina Faso experienced a popular uprising which deposed the incumbent President and dissolved the Government. A transition government was set up and governed the country for the following 13 months, in preparation for national elections which were held on 29 November 2015.

At IRC Burkina Faso we saw the context of electoral campaigning as the ideal opportunity to bring water and sanitation to the forefront of everyone’s minds. Indeed, this issue is already at the forefront of the minds of the 4,320,000 people in Burkina Faso who lack access to an adequate and safe water supply and the 16,560,000 people who have no access to sanitation facilities; what we wanted to do was make the presidential candidates sit up and take notice too.

The challenge was how to gain visibility at a time when everyone was campaigning and promising everything. Our communication strategy was structured in three key stages.

Stage 1 (August to October 2015): Mobilisation of public opinion and preparation of political stakeholders

We developed a series of key messages on what the sector expected of the new government:

We disseminated these messages on the two most popular radio stations in French and local languages three times per week, in on-line mainstream newspapers and their social media, and through direct contact with political stakeholders including the leaders of the political parties, all members of government, parliament and government institutions.

To make our messages more visible and engaging we worked with one of the best cartoonists on the continent – Damien Glez.

The results at this stage were more than encouraging:

At this stage, we stepped-up our focus with one clear message “I’ll vote for whoever promises me water”. We were confident that the politicians now clearly understood what lay behind this message thanks to the work done in Stage 1. Posters with the slogan were disseminated widely so no-one could miss them. They were published in the on-line press, they were shared on social media and were plastered across the capital city, Ouagadougou on billboards and on public busses. 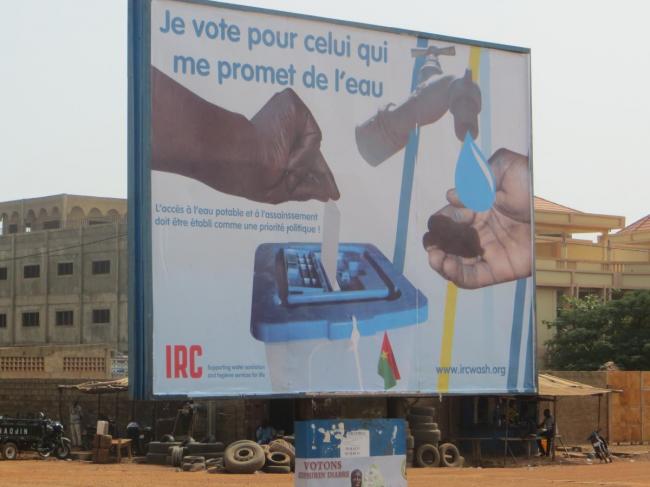 In the provinces, we worked closely with local civil society organisations to disseminate our messages. The candidates could not ignore it and the impact was immediate – they all competed to promise water in their speeches and interviews. Roch Kabore (the ultimately successful candidate) even put up special campaign posters focusing specifically on water and sanitation. He committed to eradicating the water chore and promoting a healthy environment.

Once Roch Kabore had won, the final step in our communication strategy was to publicly offer him our congratulations and take the opportunity to remind him of his electoral promise, saying that civil society would be following his actions closely.

The results were conclusive: IRC was invited to meet with the new President and we were able to explain the issues and offer our full support to help him keep his promise. When he announced his new government structure, a Ministry was exclusively dedicated to water and sanitation, giving us another opportunity to publicly congratulate him on his sector policy decisions. The President instructed his Government to be in contact with IRC on issues relating to water and sanitation and the Prime Minister invited us to meet with him and the new Water and Sanitation Minister to better understand our proposals.

Of course, it wasn’t all plain sailing. We were on uncharted territory – civil society in Burkina Faso or even the West-African region had never carried out this type of advocacy campaign particularly during elections. We were worried about how people might react, so we trod very carefully, taking all the legal precautions we could, having our project and our messages authorised by the appropriate authorities.

We also experienced some frustrations. The candidates, while they had willingly embraced the issue into their campaigns, proposed solutions that we, as sector professionals, knew were not relevant or appropriate. And they didn’t necessarily consider the concerns we had explicitly raised during the campaign in Phase 1. However, we realised that we had to accept this and work with it, recognising that the first essential step was to get the issue of water and sanitation to the forefront of the political campaigns and that the development of relevant solutions would be a longer-term goal. As it turned out, the way the new government engaged with us after the election indicated they were willing to learn.

All in all, this carefully planned and implemented communication strategy was not only immensely satisfying, it was effective in bringing the issue of water and sanitation which is a priority for so many Burkinabe citizens to the centre stage at the highest possible level. It now gives us a strong basis upon which to build a collaborative relationship with government to help them uphold their election promises and to continue our advocacy work.

This blog is part of a series on Celebrating IRC Communications that was produced for a special issue of E-Source. For the other articles in this series see the Useful Links below.

Top blog: the importance of communication “amplifiers”
The wrong shoes affect your field experience
The power of photo stories in Ethiopia
IRC Events – a lively discussion platform
Communicating the challenge