Saraswati Halder, the president of the Durganagar Kanchantala water committee, shows me the committee's bank booklet. It shows only one transaction: 100 Rupees (about 1.50 US$) deposited in 2011, more than 3 years ago.

Shamar Karan, the treasurer of the Pancham (No 5) Gheri water committee, shows me the committee's annual account books. These show the annual tariffs paid by the villagers, the expenses on repairs and spare parts and a healthy end-of-year balance.

The tale of the two committees is very similar but differs in one crucial aspect: Pancham (No 5) Gheri received ongoing support; Durganagar Kanchantala didn't.

Both villages have been having a water point for over 20 years, in both cases a tubewell with a simple PHE-6 handpump. Both villages had been managing these handpumps without having specific management committees in place. Whenever these pumps would break down, they would collect some money, try to get hold of someone to repair it and get it fixed. This process usually took a while, and people were without water for a long time.

After a while repair needs became to frequent and a complete overhaul was needed. The water point in Pancham (No 5) Gheri was rehabilitated in 2008; the one in Durganagar Kanchantala in 2011. As part of the rehabilitation process, also a standard community management arrangement was set up. A water committee was formed with its president, a treasurer, and several members. Agreements were made about the financing of future repairs. In both villages, it was agreed to set-up a tariff system, to open up a bank account and start basic book keeping. In both villages, also an initial contribution was asked from all villagers to act as initial deposit. This formed the 100 Rupee deposit in the case of Durganagar Kanchantala, and a similar amount in Pancham (No 5) Gheri.

From that moment onwards, the stories of these two villages started drifting apart. In Pancham (No 5) Gheri, the NGO Water For People (through its partner NGOs Sabuj Sangha and Digambarpur Angikar) came by regularly to check on how tariff collection was going and whether books were kept. These NGOs also worked closely with the local government authorities, the Digambarpur Gram Panchayat. As a result of this work, the Gram Panchayat issued a resolution that all water points should have their committees and that all committees should keep active bank accounts. Without those, the Gram Panchayat wouldn't support any major repair works. And Water For People helped setting up a repair mechanism, through a local handpump mechanic, called a Jalabandhu (for more information, see here).

Durganagar Kanchantala is located in the neighbouring Gram Panchayat area called Dakshin Ganghadharpur. In this area, there was no further NGO support. So, when Saraswati Halder encountered problems in collecting the second round of tariffs in her village, she couldn't call upon the support of the NGO. And there were problems. Immediately after rehabilitation the pump was functioning well. And as people were used to pay only when the pump was broken, villagers didn't see the use in paying a regular tariff. Why pay for something that is not broken? When the pump broke down last year, however, it was a major repair, and users weren't able to immediately collect that big amount. The Gram Panchayat also didn't have any resolutions or other by-laws on tariff collection, and as a result had been supporting already other villages with repairs. It couldn't help Durganagar Kanchantala out right now. Only after Saraswati Halder managed to get a loan from the Festival Committee for the Water Committee, could the repair be carried out. Now, the Water Committee needs to pay back the Festival Committee. But how can it do so, without a regular tariff revenue? 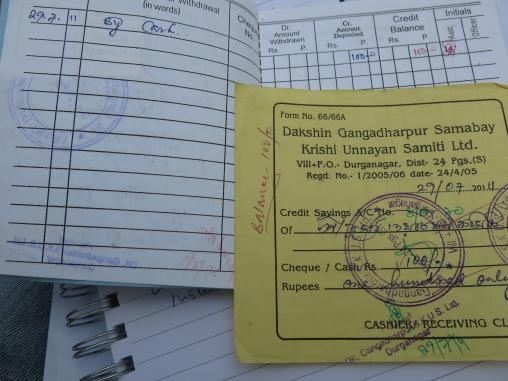 As a result, the difference in service level between the two villages is remarkable. Users rate accessibility (time spent on fetching water) and reliability (average time it takes for a repair to be carried out) much higher in Pancham (No 5) Gheri than in Durganagar Kanchantala. Slightly less than half of the users in Pancham (No 5) Gheri is very satisfied with the service and the remainder somewhat satisfied. In Durganagar Kanchantala few users are very satisfied, the majority only being somewhat satisfied.

Pancham (No 5) Gheri thus has a more or less adequate performance in its water service delivery, with its basic book keeping, reasonable service levels and satisfied users. Durganagar Kanchantala to the contrary is in a precarious situation. After the repair it is functioning, but next time it breaks down, there may again be need for a special money collection, and the pump may be out of functioning for a long time. As fewer users are satisfied with the service, it may be even more difficult to collect the money.

But the reasonably well performance of Pancham (No 5) Gheri comes at a cost. In between the NGOs and the Gram Panchayat, it costs around 47 Rupees (about 0.75 US$) per person per year to provide support: to co-finance major repairs, to coach water committees in their administrative tasks and to support committees if problems arise.

These 47 Rupees per person per year is not an insignificant amount. In fact, it is more than what people pay in annual tariffs. But, it is what is needed to keep community management going. To make sure that a water committee has an active cash flow and doesn't get stuck with only a one-off 100 Rupee deposit. To make sure that pumps are repaired within 24 hours and not only after several weeks of scraping together contributions from villagers. And above all, to make sure that users get an adequate service level, that they are satisfied with.

The effects and costs of support to community-managed handpumps in Patharpratima, West Bengal