RT @UN_Water: More toilets = more benefits for women and girls. Toilets at home, school and at work help them fulfil their potential and pl…

Universal coverage of water, sanitation and hygiene looks set to be included in the Sustainable Development Goals. What finally ends up in these goals will determine the agenda for the WASH sector for decades to come.

"We find things we like, we find thing we don't like and we find things we can live with". These words were mentioned by many Member States at the closing statements of the 28 hour negotiation marathon of the Open Working Group on Sustainable Development Goals (OWG) broadcast live this weekend. After 16 months and 13 sessions, under the leadership of the co-Chairs, Ambassadors Korosi (Hungary) and Kamau (Kenya), a package with 17 goals and 169 targets is to be delivered to the United Nations General Assembly in September. The outcome document was adopted with a standing ovation.

The proposed goals and targets are but one step in the bigger, more complex process but an important one. The OWG was established in January 2013 by a decision of the UN General Assembly with the objective to establish an inclusive and transparent intergovernmental process on sustainable development goals. 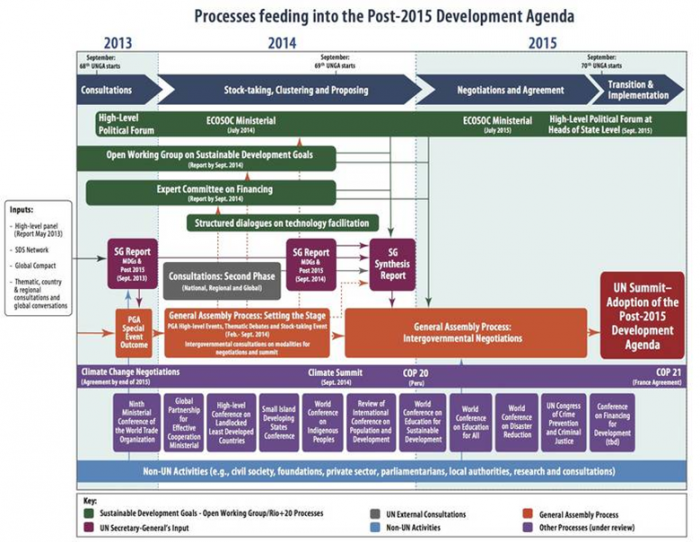 There are other consultative processes and groups, including the High Level Panel of Eminent Persons, an expert committee on financing (unclear deliverables), the Climate Change negotiations and the Disaster Risk Reduction framework re-negotiation, not all of which have the same timing or sequencing as the Open Working Group consultation.

In spite of all of these processes, the Open Working Group is still seen as one of the most important and as having considerable weight because of the participation of Member States. For the water and sanitation sector, UN-Water, UNICEF, UNDP and WaterAid are probably the agencies that have provided closest advice to the Group in these last months. IRC co-chaired, together with WaterAid, the JMP/WHO water working group and participated actively in the sanitation and hygiene working groups which fed into the existing proposal.

Where is water, sanitation and hygiene?

As soon as the document was posted, on Sunday morning, a quick search highlighted the end of neglected tropical diseases, including water-borne diseases by 2030 (Goal 3), the reduction of number of deaths and economic losses caused by water related disasters in cities and human settlements and with a focus on protecting the poor (Goal 11), the conservation, restoration and sustainable use of freshwater ecosystems and their services (Goal 15).

Most important of course is that water (and sanitation and hygiene!) has its own goal and targets (Goal 6). There have been small but significant changes when compared with the previous "zero" draft . The proposed Goal 6 is now as follows:

Few of the targets  are formulated as such – as the envisioned end state we all dream about - but are rather formulated in terms of fairly open inputs.  It is heartening then that the water, sanitation and hygiene goals targets are clear: universal access by 2030.  In an ideal world, and given our sectors long and sorry history of treating construction of infrastructure as being the same thing as the provision of services (which it isn’t) we would have liked to see more emphasis  on the actual provision of water and sanitation services.  That said, it is fantastic that such a clear and unambiguous commitment to universal coverage has made it through this first round of negotiations, and we will be doing everything we can to ensure that this goal and targets remain.

Of more concern is the weak wording of other water targets, phrased in ways that will make them all but impossible to measure.. Nevertheless, targets 6.1 and 6.2 are visionary and inspiring in nature with elements of progressive realisation from the human rights framework. While outside the household access in schools and health centres are not explicitly mentioned they are clearly included in the “for all” formulation. Either way, there is still much work to do in the remaining targets to make them smart.

There are other important goals related with the water and sanitation sector. Goal 1 on ending poverty in all its forms everywhere and Goal 10 on reducing inequalities within and among countries are inspiring and brave, reflecting a human rights approach.

What happens next? What can the organisations in the sector do to remain engaged in the debate?

Above all, we call on the core organisations – and individuals – at the heart of driving this negotiation and refinement of the SDGs, and specifically Goal 6, to be much more transparent about the process, about the content details and to be more inclusive across the WASH sector as a whole. In this case information really is power, and it needs to be wielded carefully and sensitively. What ends up in this goal – and indeed what gets cut out – will set the agenda for the sector in the coming years and even decades, will impact investment decisions and have a real influence on the scale of our collective ambition.