We ate all the meat; there are only bones to chew on now

So said Luis Romero of CONASA (the Honduran water and sanitation policy-making body), in response to the graphs below.

These were presented  as part of the sharing of the results of the life-cycle costs analysis in Honduras. The first graph shows the average per capita investment costs (based on 114 water supply projects), in relation to the population size. As can be seen, these per capita costs are much higher in dispersed rural settings (between 0 and 200 inhabitants) than in more nucleated rural settings (more than 200 inhabitants).

The country had enjoyed covering the nucleated settlements which are cheaper to reach. Now it faced the hard part.

This is not a surprising figure. The costs of development of water infrastructure are not linear with the population a water system serves. There are many fixed costs, which become relatively big in smaller systems than in bigger ones. Also economies of scale can be obtained in for example procurement and transport of materials for bigger systems than for smaller ones which are typically located further away and are harder to reach. A similar relation was found for latrine projects: average per capita expenditure was 133 US$/p in dispersed rural settlements and 85 US$/p in bigger nucleated settlements (all being pour-flush latrines).

Luis Romero’s remark referred to the fact that the country has enjoyed the relatively nice part: covering the nucleated settlements which are cheaper to reach. Now there will be a hard bone to chew on: covering the estimated 10,000 small hamlets at those very high investment costs. The formal coverage statistics don’t differentiate the degree of coverage between the dispersed and nucleated rural settlements. But, the sector experts all agree that the nucleated settlements are largely covered – at most there may be need for extensions as communities grow. But where coverage is lowest is in dispersed rural areas.

The second graph shows an even harder bone to chew on. It provides a histogram of the per capita investment costs of 40 capital maintenance projects. These are projects, that consist of the partial or full replacement of assets. They may range from the replacement of a main line to the full replacement of the distribution network, or even building a new water system on old one that has reached the end of its life span. 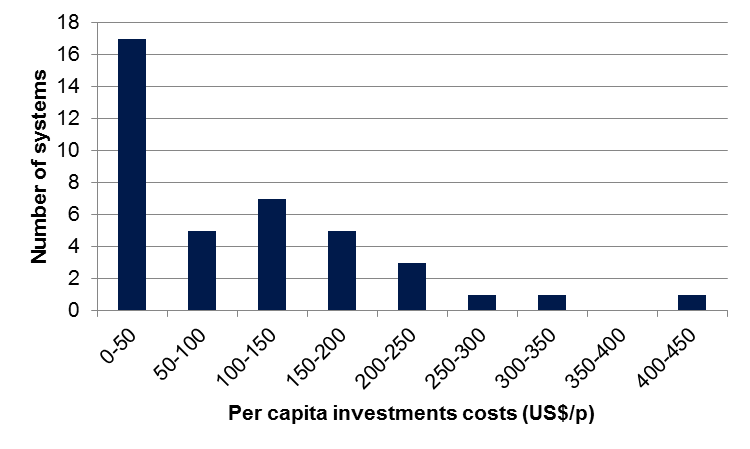 The graph shows that almost half of these projects were relatively small in size at low per capita costs, of up to 50 US$/person. These typically were projects that consisted of replacement of one critical component, such as a main line, an intake structure or a storage tank. Communities covered on average 12% of the costs of these works; the rest was paid out of external funds, mainly grants and loans by donors and development banks to the government of Honduras. Supposedly, communities are responsible for covering such kind of capital maintenance works out of the tariffs they raise. This graph provides again evidence for the fact that this is clearly not happening. A typical rural water tariff is about 2 US$/family month. If we assume that half of this is amount is set aside for saving and the other half to cover running operational costs (e.g. for chlorination and paying a remuneration to the village plumber), than on average 12 US$/family, or 3 US$/person can be saved on a yearly basis. A replacement that costs 50 US$/capita can only be afforded every 16 years. In reality, many components have much shorter life spans. Only in the most optimistic scenarios can communities’ savings cover these costs. And the graph shows that in fact, the government through its donor funds, steps in to pay the bill. In addition, there is a number of projects that had much higher per capita costs, these being systems that were almost completely replaced.

This is also the graph that shows how the future of the Honduran sector investments may look like. As most nucleated settlements are covered, many will need periodic replacement of critical assets, either big or small. Eduardo Sánchez, programme manager at a rural water supply programme, illustrated this. A recent call for proposals of that programme for investment projects, yielded 32 proposals from municipalities covered by the programme, many of which were for capital maintenance projects. There are simply few uncovered nucleated settlements where new systems need to be built – but many need replacement works, big or small.

Should the rural WASH sector invest in extending coverage to all the small dispersed settlements, at high per capita costs, or in co-financing capital replacement works in villages already covered?

For the rural WASH sector this poses a very critical question on where to invest: in extending coverage to all the small dispersed settlements, at high per capita costs, or in co-financing capital replacement works in villages already covered but which simply have not been able to raise sufficient funds to undertake such works themselves.

This led Luis Romero to make another important remark: “We need to develop a very clear policy on these kinds of capital maintenance projects”. He explained that below a certain total and per capita costs, such projects should not be done by the public sector, or at most only through a combination of community and municipal contributions. Only in that way, would the government be able to extend services to the unserved in dispersed settings, while at the same time give the signal to communities that they need to save up for replacements and not rely on the government to step in, particularly if the repairs fall within their capacity to pay. This will above all require developing much clearer definition of what are minor replacements that can be done by the community, and which ones are major, for which it would be justified to have government contributions. This would need to be applied in a consistent manner as well.

Such a policy may be developed on the basis of the kinds of unit costs ranges we are identifying. Enforcing it will be more complicated, as it requires consistent application by all, both government and NGOs. And even then, there may be all kinds of political reasons for the government to jump in the next time the main line breaks, or a tank needs to be replaced. For the years to come it means chewing both the bone of reaching everyone, indeed everyone, and ensuring that the ones who are reached have services that last forever.