“I am bored with this work”; WASH's mid-life crisis

"I am bored with this work", my friend, WASH, confided. I recommended him not to waste his mid-life crisis.

WASH and I have been good friends since 2001. The other day, the two of us went for drinks to celebrate our friendship. We dug up old memories and philosophised about the future.

"I remember when we first met in 2001", he said. "We were both in our early twenties starting our professional lives. You started working at IRC, and I had just started my first job with the UN, where I was tasked to halve the percentage of people without access to water and sanitation".

"You have done quite well in that career", I said. "You achieved a lot in that period between 2000 and 2015. Okay, you only met one of your two targets, but that one for sanitation was too ambitious anyway. You also became a good professional. In many countries, you established entities taking care of water and sanitation, you developed lots of programmes and carried them out diligently. And in the end you got your promotion with your exciting new job as Chief Executive Officer for Universal Access to Water, Sanitation and Hygiene".

My friend remained silent for a while. Eventually he said with a big sigh: "Stef, to be honest, I am bored with that job. I have done this work now for some 18 years, and when I look back, I feel I have not achieved enough". He then showed me this graph: 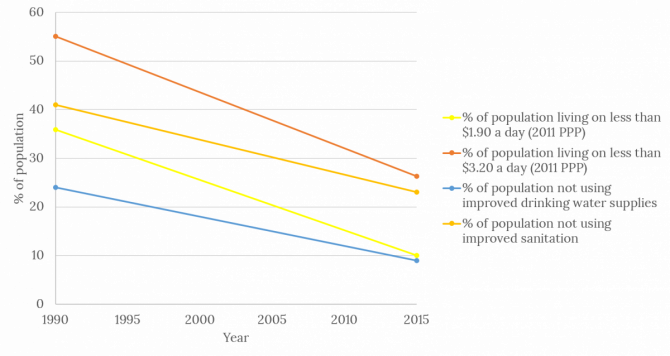 I also feel as if many of the issues we faced at the start of our careers are similar to the ones we still debate now. Back in 2001, we were also working on issues of gender and sustainability of water and sanitation services. We were also concerned about ensuring aid effectiveness in WASH. Here, have a look: the programme of the Stockholm World Water Week in 2005. Compare it to the one of 2018. You will see a number of topics that are the same: mobilising finance from capital markets for investments in water supply; approaches to marketing sanitation; linking water resources management and WASH. Sure, there have been interesting developments in our work over these years. Stef, I remember that you bought your first cellphone from your first salary when you started at IRC in 2001. Now everyone is using smartphones to monitor water supply or to pay for water. But I don't see any developments in the sector that really make a step change. There is too little progress, too many of the same issues and too few exciting new developments. Do you understand why I am bored with my work?"

We remained silent for a bit and ordered a next round of drinks.

"I see what you mean", I said. "A few weeks ago, at the office we did an exercise of looking at trends and how various scenarios for the future may affect the achievement of the SDGs. I went back into previous trends analyses we did in 2006, 2011 and 2016. If you look back at the one from 2006 – which predicted scenarios up to 2015 -, you will see that a 'business as usual' scenario has unfolded. Countries make steady progress in providing access to services, and improving service levels, as they grow richer. Poorest countries, and the poorest segments in middle-income countries lag behind. Underlying paradigms and approaches in the sector evolve, but only very gradually, as was already shown in the 2011 update. For example, there is definitely more emphasis on service delivery now, than 15 years ago, but this was a slow process as many stakeholders in many countries had to change. It just made me wonder whether our sector can at best develop marginally faster than the overall development of a country – and in most cases, just keep pace with that. That would mean we have to accept that changes in our sector are inherently slow".

"Accepting that would make our work boring", WASH responded. "And not only boring to us who work in it, but also to the tax payers, investors and donors who finance it. They may want to put their money into more exciting sectors. I want something new, something big to happen, something that breaks out of the routine pattern of gradual growth".

"Hearing you talk like this, it sounds as though you are entering a mid-life crisis. You are almost turning forty, you are bored with your job and you want exciting new things. And to be honest with you, my dear WASH, it is actually a good idea if you get yourself into a mid-life crisis. And, as they say, 'never waste a good crisis'. So please do not waste your mid-life crisis by taking a parachute-jumping course or buying a cabriolet. Use it to do something disruptive to our sector. It works. Look at Swachh Bharat in India. It was evident that India was in a big sanitation crisis a few years ago, with such high levels of open defecation, particularly in a country with that level of wealth. Through the Swachh Bharat campaign and the leadership by Prime Minister Modi, new efforts were brought into the sector, and we see the results".

"Are you seriously suggesting I should get a mid-life crisis?".

"Yes indeed. In fact, I can name a few countries that should get one as well, starting with my beloved Honduras. When I started working there in 2007, the sector was very dynamic because of a big reform started in 2003. Through that reform water and sanitation services were decentralised to municipalities, community management was formalised, an independent regulator was established and much more. Everyone was busy putting that reform into practice. Now the sector is in some kind of crisis by paralysis. The limits of what the reform could achieve have been reached, and the sector is now stuck with the set-up of that reform. Colleagues are now discussing that the only way to get out is by triggering another reform or at least making substantive changes. By making changes to the WASH system, it would become more in tune with the needs and capacities of the country now, it would also bring new dynamics to the sector".

WASH now looked a bit more upbeat. "Now that sounds like the excitement we need. I say 'cheers' to mid-life crises to trigger WASH systems change' - that could even be a nice title for an abstract to the Stockholm Water Week!"